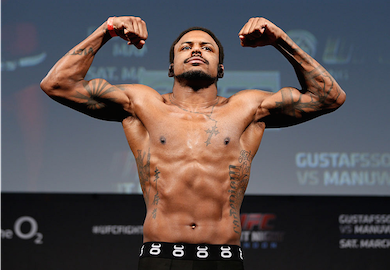 The co-main event featured two top lightweights and former training partners in Michael Johnson and Melvin Guillard. Both fighters are known for their exciting styles and it was expected that this fight would not make it the full three rounds.

In the first round Johnson looked to land his kicks, while Guillard wanted to sit back and counter. Johnson began to get frustrated with Guillard’s patient game-plan. In the latter part of the first round, Johnson got caught coming in, but seemed to recover quickly.

In the second round Guillard’s relaxed counter style caused Johnson and the London crowd to grow restless. Johnson wobbled Guillard towards the end of the round, but was unable to finish the fight.

Guillard’s lack of productivity continued into round three. Johnson seemed to really take control of the fight with his great timing and pace. Guillard seemed upset about an eye poke that the referee didn’t see.