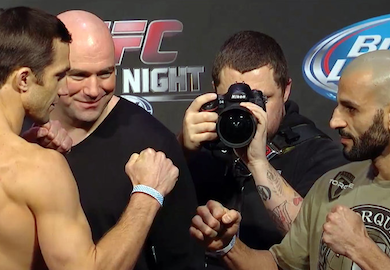 If you cannot make the broadcast, or just need to get caught up on results, BJPENN.COM will be giving you blow-by-blow coverage right here in this thread.

Round 1 – It’s a Wednesday night main-event! We are underway. 30 seconds pass and nobody has landed with anything. Rockhold blocks a high kick. Rockhold lands a right hook that stuns Philippou but Philippou gets right back up and nails Rockhold with a quick shot. Big right hand from Philippou. Rockhold’s headkick lands. Philippou is bleeding and Rockhold lands a jab. Cross lands for Rockhold. Rockhold lands a body kick and Philippou drops! Herb Dean stops the fight and it’s over in the first round.

Round 1 – Inside leg kick lands early for Tavares. Larkin’s hands are high and balled up, but Tavares is able to get through and land a hook. Another leg kick from Tavares. They exchange leg kicks. Larkin blocks a kick to the body. Tavares is doing a good job at striking fast and cutting Larkin off. Larkin lands a unchecked leg kick. Larkin hits a very nice right uppercut. That rocked Tavares’ head back. Tavares answers with a right hand of his own. After a nice level change, Tavares was able to get the back of Larkin but it would lead to nothing. The horn sounds and we are done. 10-9 Tavares

Round 2 – Tavares opens up the round with a nice combo that sends Larkin stumbling backwards, bouncing off the cage. Larkin lands another uppercut in the same style that he did in the first. Great combo from Tavares. Tavares is staying a lot busier than Lorenz Larkin, landing more in the process. Tavares throws a five punch combination, changing levels, landing three of the five. Impressive. Larkin still has knockout power and is threatening to use it. Larkin looks for another one of his uppercuts but Tavares side steps it and answers with a left hook. Tavares shoots for a takedown but Larkin stops it. Larkin is pressed against the cage and is dragged to the ground. Tavares has the back of Larkin and both hooks are in. Larkin reverses positioning and is on top of Tavares, but the round ends. 10-9 Tavares

Round 3 – Tavares continues to attack the leg of Larkin. Larkin decides to turn the volume of strikes up and lands a couple shots but Tavares cuts him off and lands more leg kicks. Tavares misses a right hand. Nice elbow from Larkin. Larkin checks Tavares’ leg kick. Tavares throws a spinning back fist, but it’s blocked. Still, it was nice looking. Larkin lands a brutal straight kick to the body. Tavares shoots for a takedown but Larkin goes for a guillotine. Tavares blocks it and Larkin invites him back to his feet. Tavares pushes him against the fence and Larkin throws some elbows to the head of Tavares. Tavares pushes off and they’re back in the middle. Tavares eats an uppercut. Another failed takedown from Larkin. Horn sounds. 10-9 Larkin

Round 2 – Easton attacks the body with a straight right. Dillashaw lands two jabs in a row. They swap leg kicks. They swap jabs and Dillashaw lands with a right straight. Dillashaw lands a high right kick and it cracks Easton. He shoots for a takedown and fails, Dillashaw is on top of him throwing blows. Easton’s left eyebrow is busted open. Dillashaw is now in the half guard of Easton. As Easton tries to make his way back to his feet, Dillashaw greeted him with a huge knee to the dome. Eason tries two spinning back kicks in a row but they don’t land on its intended target. Dillashaw brings the fight back to the ground. Easton wall-walks up and is pressed back against the fence. Dillashaw attacks Easton’s knees with his own. Easton goes for a straight-elbow armbar but Dillashaw escapes right away. They are back in the middle of the octagon as the second round ends. 10-9 Dillashaw

Round 3 – Easton was informed by his corner he needed a knockout to win the fight so expect him to turn up the dial and throw some power-shots. Dillashaw lands a nice right uppercut. Easton eats a right hook. Dillashaw is attacking the body but Easton keeps pressing forward, trying to end the fight. Easton lands on the inside with a jab but Dillashaw counters with a hook. Dillashaw is just on another level tonight. Right cross from Dillashaw. Easton catches Dillashaw with a leg kick. Ten seconds left. Dillashaw lands two knees to the body and continues to throw blows until the round ends. 10-9 Dillashaw

Round 1 – Brunson lands a straight right early. Romero barely misses two big punches and goes for a HUGE knee but it doesn’t connect. Brunson takes down Romero. Brunson ducks under a wild hook. Brunson lands a kick to the neck of Romero and it’s amazing that Romero didn’t crumble. As a matter of fact, he’s right back to pressing the action. He tries to trap Brunson against the fence but Brunson runs away to the middle of the octagon. Romero lands an inside trip but Brunson pushes him off. On the way up, Brunson cracks him with a punch that sends him spinning backwards! It was pretty looking, but it was more of a momentum thing because Romero was fine. They end the round in the clinch. 10-9 Brunson

Round 2 – They’re noticeably slowing down. After some inactivity, Romero throws a punch that looks like it hit the body but it didn’t. It hit straight-up nuts. The fight resumes, giving both fighters a chance to recover a bit and they’re back to throwing a fast pace of shots. Brunson lands an elbow and a left hand. Romero tries to attack the body but keeps leaving himself susceptible to strikes. Romero lands a flying knee to the body! Brunson lands another takedown on the silver medalist. He’s chopping down at the fatigue of Romero by slowly transitioning and peppering body shots in there. Romero makes his way back to his feet and tries to jockey for a takedown. The round ends with Brunson backing up from Romero’s strikes.

Round 3 – Brunson is letting Romero dictate where the action goes, but it’s not leading to anything beneficial for the aggressor. Romero drops Brunson with a HUGE right and drops him. Brunson recovers quickly and comes right back. Brunson lands a knee. Brunson’s hands are starting to lower down and he’s getting hit with some serious shots. Romero is on top of Brunson and is landing punch after punch. Brunson turns away from him and Romero starts landing elbows galore. The referee calls an end to the fight after Brunson stops defending his body.

Round 1 – Dustin Ortiz reminds me of Frank Mir and Screech combined a little bit. A LITTLE BIT. Ortiz lands a big right hand within seconds. Ortiz pushes Moraga against the cage and they’re in a clinch where neither man has an advantage. Moraga gets taken down and Ortiz is in his open guard. The crowd just found out Ric Flair is in the crowd and they are now “WOO”ing. Dustin is staying busy enough to not get the fight stood up. Moraga is working for a triangle choke from the bottom but Ortiz breaks it open with posture. Solid round for Ortiz. 10-9 Ortiz.

Round 2 – Moraga opens up the round with a solid shot, finally. He’s starting to work on the legs and is chopping at Ortiz with leg kicks. Ortiz lands a straight to the body and a then a jab. Ortiz lands a right hook. Moraga lands a BIG right hand and Ortiz shoots for a takedown. Ortiz seems to have survived but he’s now pressed against the cage. Ortiz slips and falls to the ground after feigning a strike. He almost locked in a rear naked choke which turned into a crank, but Ortiz escaped. Moraga gave up position and Ortiz took to side control on top. They both ended up resetting the action in the middle of the octagon on their feet. Ortiz shoots for a takedown but Moraga’s defense is strong. Ortiz gets on top of Moraga anyway and the round ends with Moraga making his way back to his feet. 10-9 Moraga

Round 1 – Here we go, folks! Miller’s long legs kept Sicilia at bay. Sicilia is bouncing around and has his right hand cocked, ready to blow. Miller’s jabs are successful. Sicilia’s big right hand whiffs, thanks to the distance between the two. Sicilia needs to be careful not to expend all his energy on wasted big shots. Sicilia dictates where the fight is going, constantly pushing Miller towards the fence. Sicilia eats a teep kick. Miller won’t let Sicilia get inside. Miller takes a body shot and walks away from the action to reset his stance. Miller lands a one-two combo. Miller’s jabs are very effective, still. Sicilia isn’t adapting. Round ends, 10-9 Miller.

Round 2 – Miller opened up the round by landing some combinations. Miller dropped him with a HUGE right hand. Miller tried to lock Sicilia in a guillotine but he escaped. Miller took the back and slapped on the rear naked choke! Sicilia submits and Miller is crowned the winner.