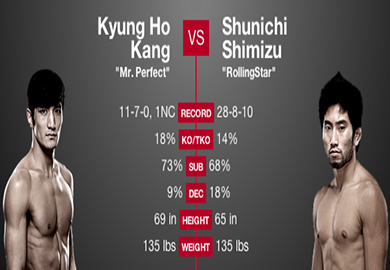 Kyung Ho Kang and Shunichi Shimizu had the honors of kicking off the main card.

Kyung Ho Kang was doing a great job early on in the first round and was controlling where the action went. Skimizu almost walked into two different submission holds (armbar and triangle choke) but he was saved by the fact that Ho Kang threw two illegal elbows from the top.

The referee paused the action and took two points away from Ho Kang without warning. The elbows seemed to have busted open Shimizu, so it was a reasonable punishment for the crime. If it wasn’t for the point deduction, Ho Kang would have won the first round.

As a result of losing two points, Ho Kang showed a sense of urgency throughout the second round. Shimizu was simply outclassed and overpowered on the ground as he ate shot after shot and allowed his opponent to transition with ease. Ho Kang took the second round at 10-9, but still didn’t have the fight secured despite winning two rounds. He would have to finish the fight in the third to win.

Ho Kang was quick to take the fight to the ground in the third and tried to finish it with vicious elbows and punches from Shimizu’s guard. They sounded painful and opened cuts, but Shimizu was never in any danger as he was responsive after each shot he absorbed.

Kyung Ho Kang eventually found his way to full mount where he transitioned to an arm triangle choke that forced Shunichi Shimizu to submit right away.