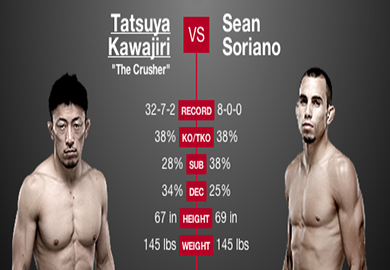 The co-main event opened up with high energy from both competitors.

Sean Soriano did a great job countering Tatsuya Kawajiri’s takedown attempts with knees to the face. Kawajiri’s nose was busted up not even two minutes into the fight. After multiple attempts, Kawajiri finally completed a takedown with two minutes left but Soriano got right back up to his feet with ease. Still, every time Soriano got back up Kawajiri would drag him back down.

Kawajiri finally found himself in an advantageous position with a minute and change left in the first round. Soriano tried his best to defend the rear naked choke while on the wrong side of a body triangle. Kawajiri almost had it locked in a couple times, but Soriano did a great job keeping his neck close to his chest. Kawajiri abandoned the submission gameplan with thirty seconds left in the round and opted to just wail on the face of his opponent. Soriano ate some serious blows as the first round closed out.

Soriano opened up the second round with another strong knee but he found himself on the ground in bad shape seconds later. Kawajiri had the back of Soriano and got the hooks in right away. The rear naked choke was locked in and Kawajiri stretched him out and forced him to submit. The referee did not see the tap and Soriano promptly passed out.