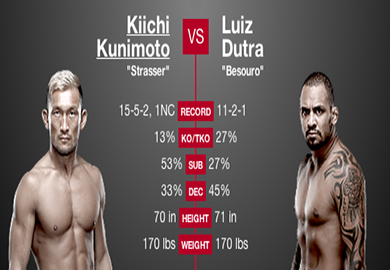 It started out with a slow pace, but both Kiichi Kunimoto and Luiz Dutra were throwing strikes that looked promising. Kunimoto was working for a takedown as he pressed Dutra up against the octagon fence, then things took a turn for the worst.

Dutra defended the takedown attempt with illegal elbows to the back of the head. He landed four elbows and Kunimoto dropped to the ground. The referee called a halt to the action to check on the downed fighter. After minutes of deliberation, it was clear Kunimoto would not be able to continue the fight. Dutra was disqualified and his opponent was awarded the victory.

Kiichi Kunimoto was carried out of the octagon on a stretcher. BJPENN.COM will have updates on his health as details are released.

Kiichi Kunimoto defeated Luiz Dutra by way of DQ (Illegal Elbows) 2:57 of Round 1