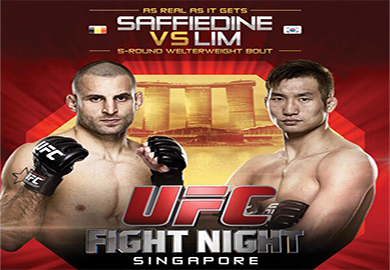 Submission of the Night: Russell Doane
It seems as if a triangle choke was destined to end this fight. Leandro Issa almost locked in the hold at the end of the first round but Russell Doane’s arm was not in position to be put to sleep. Later on in the second round, Doane slapped on a triangle choke of his own and it seemed like it was going to be a stalemate; Issa’s arm was out of position just like Doane’s was in the first round. However, Doane was persistent and must have really wanted this bonus because he pulled and torqued as hard as he could and was eventually able to put Issa to sleep.

Knockout of the Night: Max Holloway
Holloway and Chope had the honors of closing out the preliminary card and tried to bring the crowd to life after a dull fight. Holloway and Chope succeeded in bringing the fans back into the show, but it was Holloway who really shined in this performance. He showed how diverse he was in his striking and even landed flush with a spinning back heel kick to the body of Chope. Chope simply took one shot too many and fell to the ground.

Fight of the Night: Tarec Saffiedine vs. Hyun Gyu Lim
This card was live at 6:30 AM ET and many American fans will have missed this fight. Saffiedine and Lim punished not only the fans for missing the card, but they punished each other as well! Saffiedine dominated most of the fight and displayed great technique in changing levels. He circled around Lim and chopped him down with leg kicks, leading to multiple knockdowns accredited to the strike. Lim showed great warrior spirit and kept pressing forward despite walking on a heavily bruised lead leg; that leg is going to be purple and black by tomorrow. In the fifth round, Lim let out a warrior scream and went for broke. He put his hands to his side and started swinging for the fences— a strategy that actually worked! He clocked Saffiedine with a strike that wobbled him and tried to finish the bout but it was too late for that. After the bout ended, Lim collapsed in pain and Saffiedine had to lean on his teammates to stay standing; that’s a sign of a fun fight.