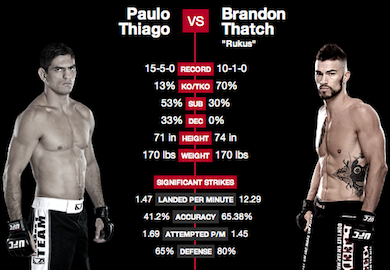 Brandon Thatch walked into the octagon with a reputation to uphold and many questioned if he could meet expectations going up against UFC veteran Paulo Thiago. Thatch hushed the naysayers, though, when he ended the fight in the very first round.

Thatch admitted he wanted to avoid Thiago on the ground so he did what he had to do to keep the fight standing. He got taken down early on, but Thiago could not keep Thatch on his back. Thatch hit a devastating knee to the ribs of Thiago and folded him; Thiago collapsed to the canvas. Paulo Thiago submitted to strikes seconds later.

Brandon Thatch defeated Paulo Thiago by way of Submission (Strikes) 2:10 of Round 1