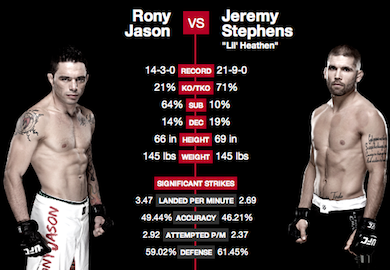 Taking the fighter’s records into consideration, nobody expected this fight to make it to a judge’s decision. Most did, however, expect it to take longer than 40 seconds.

In a fight that didn’t leave the first minute— let alone the first round, both Stephens and Jason looked confident in their striking. Jason threw a flying knee and that was an indication we were going to see an exciting fight. Stephens connected with a headkick seconds later that sent Jason crashing to the mat. With his eyes glazed over before he even hit the canvas, Stephens connected with a single follow up blow before the referee pulled him off.

It was a shin-to-chin knockout.

Jeremy Stephens defeated Rony Jason by way of KO (Head Kick) :40 of Round 1