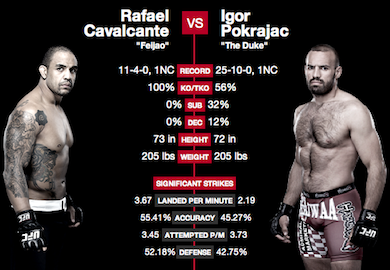 You could tell the fight was not going to make it to the judge’s decision by the way they were throwing bombs from the get-go.

Igor Pokrajac landed enough shots within the opening seconds to push the fight toward the fence. Although Cavalcante landed some counter shots of his own, Pokrajac worked the body while Cavalcante was pushed against the cage. They clinched and Cavalcante connected with a knee that landed square in the nose of Pokrajac. Cavalcante followed up with numerous knees and Pokrajac fell to the ground. Cavalcante landed a few shots and the referee peeled him off of his opponent; Pokrajac couldn’t bear the pain and submitted due to strikes.

Rafael Cavalcante defeated Igor Pokrajac by way of Submission (Strikes) 1:18 of Round 1