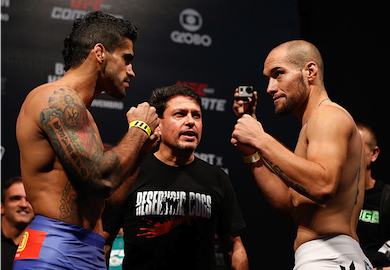 Tonight from the Goiania Arena in Goiania, Goias, Brazil, the UFC returns to FOX Sports 1 with ‘UFC Fight Night 32: Belfort vs. Henderson.’

Round 1 – Maria attempts a spinning back fist. He whiffs on a spinning back kick. Ortiz seems to be a bit more methodical in his approach and successfully lands a right hook. Maria takes him down and has the back of Ortiz, but Ortiz successfully gets back to his feet after wall walking up. Maria lands a trip takedown and Ortiz is back up to his feet in ten seconds. They’re back in the center of the octagon, standing. Ortiz hits a very nice combination that backed Maria up. Ortiz is pressuring Maria up against the cage and Maria takes an accidental knee to the groin. Fight is paused. Fight resumes. Maria connects with an inside leg kick/left hook combination that lets Ortiz grab hold of his leg. Ortiz goes for a takedown and he has Maria’s back, now. The crowd is booing. Maria makes it back up to his feet but Ortiz lands a knee as they separate. Ortiz changes his level and shoots for a takedown— it’s very effective. Ortiz almost walks right into a guillotine. Maria has something going for him here. He has the positioning for a guillotine executed but he doesn’t have the angle to submit his opponent. Horn sounds. 10-9 Maria.

Round 2 – Maria continues to pound the leg of Ortiz. Ortiz hasn’t been able to find his range due to the wild and unorthodox attacks by Maria. Maria continues to attack the lead leg. Ortiz tries to keep Maria at bay with a straight kick. Ortiz eats a big right hand. Maria connects with a left straight/right hook. Maria takes another shot to the groin. Fight paused. Fight resumes. Maria goes right back to attacking the inside of Ortiz’s leg. Ortiz has his fists clenched, but shoots for a takedown. It’s stuffed. They get up and jockey for positioning, grappling, but separate cleanly. Ortiz connects with a right handed Superman punch. Maria tries a body kick, but Ortiz throws it away. Maria tries to drag Ortiz down, but fails. They clinch, Ortiz connects with two uppercuts and Maria pushes him off. 1:30 left and they’re in the middle of the octagon. Ortiz executes a body lock takedown and is in side control. He wants to advance to mount, but Maria has his leg propped up which will aid in preventing the unfavorable transition. Maria bucks up and Ortiz lands with some strikes. Maria is bleeding. He has Ortiz in a front headlock, and he transitions it to a guillotine! Ten seconds left. Horn sounds. Saved by the bell. 10-9 Ortiz.

Round 3 – Ortiz is looking to land an inside trip early. He has Maria pressed against the fence. Maria is defending intelligently but he’s losing position as time grows. Ortiz lands a takedown 40 seconds into the round. Ortiz lands a hard right while on top of Maria. Ortiz gets into full mount and is looking to transition to a head-and-arm triangle. Maria gets him back to half guard. Back to mount for Ortiz. He’s pounding away with short elbows. Maria gets him back to half-guard but Ortiz is in side control. Ortiz gets to back mount and he locks a leg up. He’s pounding away at Maria’s head. The referee stops it! Questionable, but he was eating some serious shots.

Dustin Ortiz defeated Jose Maria by way of TKO (Punches) 3:19 of Round 3

Adriano Martins defeated Daron Cruickshank by way of Submission (Kimura) 2:49 of Round 2

Round 1 – Big kick to the body from Salas. Tavares is welcoming Salas to the canvas and the referee stands him up. Tavares lands a combination. They’re in a clinch and we are seeing nice dirty boxing from both of them. Tavares lands a takedown. Tavares picks up Salas, walks to the center of the octagon and slams him to the canvas. Nothing knockout worthy, but it was impressive. Salas hits Tavares with back elbows from the bottom. Tavares has both hooks locked in. He secures his arm under the neck of Salas and he submits! Tavares wins by submission.

Thiago Tavares defeated Justin Salas by way of Submission (RNC) 2:38 of Round 1

Round 1 – Perpetuo eats a leg kick. Perpetuo drops Akhmedov with a right hook! He’s on top of him looking to finish the fight but Akhmedov recovers. Akhmedov now has Perpetuo pressed against the fence and he’s throwing hooks; it doesn’t look like he’s trying to take him down just yet. Akhmedov drags him down to the ground but Perpetuo pushes off and caught him right on the temple with a punch! Akhmedov takes Perpetuo back down and he has his back. It looks like he has a RNC locked in but he escapes. Akhmedov still has his back and is softening him up with punches. He looks for the RNC again but fails. Perpetuo is back to his feet and takes Akhmedov down. Akhmedov goes for an arm lock from the bottom but loses it. Perpetuo is catching him with blows. Akhmedov gets back to his feet and Perpetuo is head hunting. Akhmedov drops Perpetuo with a big right hand! Perpetuo is out of it. Akhmedov follows up with an uppercut and Perpetuo flops on the ground. The referee stops it. Game over in Round 1.

Omari Akhmedov defeated Thiago Perpetuo by way of TKO (Punches) 3:31 of Round 1

Round 1 – Pepey throws a wild overhand right. Pepey is working for a single leg takedown, and would have secured it if Sicilia hasn’t reversed right away. Sicilia is now on top in Pepey’s guard. Sicilia lands a couple strikes. Pepey lands two upkicks. Sicilia postures back down and pops Pepey with a number of bombs. Pepey’s guard goes down and Sicilia follows up with a few unanswered right hands. The referee stops it. Another first round stoppage.

Sam Sicilia defeated Godofredo Pepey by way of TKO (Punches) 1:42 of Round 1

*Looking for our main card coverage and results? Find them HERE.