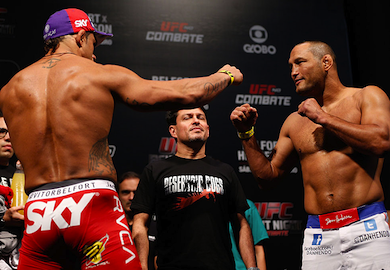 Tonight from the Goiania Arena in Goiania, Goias, Brazil, the UFC returns to FOX Sports 1 with ‘UFC Fight Night 32: Belfort vs. Henderson.’

If you can’t make the live card then tune in here for our official main card play-by-play and results thread.

If you’re looking for preliminary card results and breakdowns find them HERE.

Round 1 – With a touch of the gloves, we are underway. Jason seems confident right off the bat as he throws a flying knee in the first ten seconds. Jason almost lands with a big right hand. Stephens connects with a head kick! Shin to chin and the fight is over! The crowd is silent.

Jeremy Stephens defeated Rony Jason by way of KO (Head Kick) :40 of Round 1

Round 2 – After a minute of strikes not 100% connecting, LaFlare takes Ponzinibbio down to the ground. Ponzinibbio gets back up seconds later but eats a knee before he gets back to his feet. They’re back in the middle of the octagon. LaFlare shoots and Ponzinibbio defends. Ponzinibbio misses a high kick. LaFlare throws one of his own but it’s blocked. Ponzinibbio lands a ice combination and he’s starting to put his punches together! LaFlare is backing up and fade off but he lands a counter that wobbles Ponzinibbio. LaFlare counters a knee with a straight left. LaFlare lands a takedown with a minute left in the round and immediately transitions to half guard. The round ends on the ground. 10-9 LaFlare.

Round 3 – Accidental eye poke to open the round, no fight pause though. LaFlare eats a body kick. LaFlare counters a spinning attack with a slam, and LaFlare goes right into side control. LeFlare throws a headkick but Ponzinibbio ducks into his knee and he gets knocked down! LaFlare tries to dive on him to finish the fight but Ponzinibbio can take a serious punch. He follows up with knees to the body and elbows but Ponzinibbio doesn’t stop trying to get back to his feet. We’re back in the center of the octagon and Ponzinibbio drops LaFlare. Ponzinibbio is exhausted, though, and doesn’t follow up at all. Ponzinibbio throws a weak punch that LaFlare almost counters to an omoplata, but it leads to nothing. LaFlare ends the round in side control. 10-9 LaFlare

Round 1 – Thatch reminds me of that guy from the NOS commercial. Thatch throws a head kick that gets avoided. Thatch’s posture is low. Thiago eats a knee in the face but takes Thatch down. Thatch is right back to his feet, though. Thiago is in the clinch position. Thatch misses a knee but hits a body kick. Thiago looks for a trip takedown but fails. Body shot from Thatch. Thatch lands a knee to liver of Thiago and he collapses. He hits two follow up shots and Thiago taps out from strikes in the first round. Ouch.

Brandon Thatch defeated Paulo Thiago by way of Submission (Strikes) 2:10 of Round 1

Round 1 – For the sake of accurate play-by-play, I will be referring to both men by their first names. With a touch of the gloves, we are underway. Igor presses forward and is connecting with big shots, but Rafael is countering with shots of his own. Igor has Rafael pressed against the fence and is attacking the body. The crowd is booing and wants them separated. Rafael connects with a series of knees and Igor covers his face with his arms. Rafael continues to throw knees and Igor drops to the ground— he needs to defend. Rafael connects with a couple unanswered punches and the referee pulls him off.

Rafael Cavalcante defeated Igor Pokrajac by way of Tapout (Strikes) 1:18 of Round 1

Round 2 – Cezar connects with a power double and Daniel has him in his half guard. Daniel gets him back to his open guard. Cezar is working on top with methodic blows but the crowd is still bored with the lack of action and wants it standing. Cezar postures over Daniel and Daniel rolls out. They’re back to their feet. Cezar eats a brutal right hook and his hands go down! Daniel doesn’t follow up. Seconds later he connects with another right hand. Cezar can tell he’s in danger and shoots for a takedown. He’s in Daniel’s half guard. Cezar is threatening an arm triangle and the referee stands them up! Ridiculous standup. Daniel lunges for a shot but eats a counter left. The round ends with Daniel pressing Cezar against the fence. 10-9 Ferreira

Round 3 – Daniel connects with a big shot to open the round. Daniel gets Cezar back and tries to take him down, but they separate. Daniel connects with a few shots before they square off. Cezar lands another takedown and has half-guard. Daniel goes for a guillotine choke but he’s in no position to lock it up. Cezar is fine with keeping his opponent down on the ground. The referee stands them up and Cezar shoots for a takedown right away. Daniel makes it back to his feet but Cezar has his back. Cezar is working on the rear naked choke. The round ends with Daniel defending the RNC. 10-9 Ferreira

Round 1 – They high-five and we are underway. This has a big-fight feel to it and it’s on free TV. Henderson’s right hand is cocked, of course. Belfort’s stance is low. Henderson hits a right hand and Belfort lands a countershot that drops Henderson! Belfort is firing away with shots and Henderson tries to get back to his feet. Belfort connects with a devastating head kick and Henderson is out. The referee scurries over and pulls him off. Henderson has been finished with strikes.

Vitor Belfort defeated Dan Henderson by way of KO (Head Kick) 1:17 of Round 1