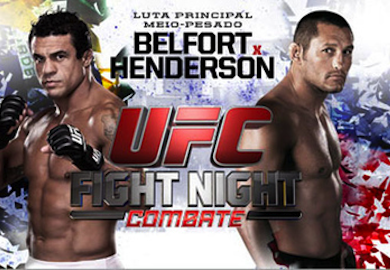 Submission of the Night: Adriano Martins
Adriano Martins almost stopped the fight in the first round when he was close to locking in a kimura, but Daron Cruickshank managed to escape danger. Daron Cruickshank ate a shot earlier in the fight that put him on his bum, so his striking game was very cautious in the second round. Martins was able to secure a takedown and he came close to locking in a kimura. Cruickshank defended intelligently, only to let Martins get off another kimura attempt. This would be the last; Martins won the fight in the second round with a straight kimura.

Fight of the Night: Omari Akhmedov vs. Thiago Perpetuo
This fight was exciting right from the opening minute. Perpetuo dropped Akhmedov with a right hook early on and attempted to finish the fight, but Akhmedov was quick to recover. That set the pace for an exciting fight. The rest of the fight saw action against the fence, on the ground and more near-knockout situations. The fight saw an end when Akhmedov dropped Perpetuo with a big right hand. Perpetuo seemed out of it as Akhmedov followed up with an uppercut. Perpetuo flopped on the ground and the referee called a stop to the fight.

Knockout of the Night: Vitor Belfort
Vitor Belfort shocked the world tonight and became the first man to knock Dan Henderson out. The two previously met at ‘PRIDE 32’ years ago and Belfort wasn’t able to walk away with the win the first time, so he was looking to redeem himself tonight. He ate one of Henderson’s right hands and proceeded to drop him with a punch of his own. Henderson made it back to his feet only to get dropped by a head kick. Henderson’s eyes rolled to the back of his head and the referee stopped the fight seconds later. It was truly a shocking performance.