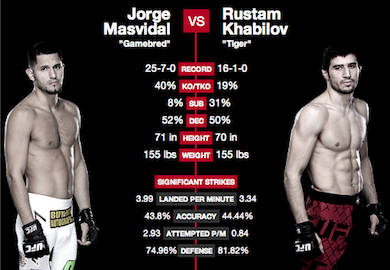 Khabilov opened up the first round with a thunderous overhand right that let Masvidal know he was not to be underestimated. Jorge Masvidal let it be known that although he got cracked with a decent shot, it did not phase him and he continued to press forward. The two exchanged some decent shots throughout the opening round but the most impressive stat is that Masvidal stuffed all of Khabilov’s takedown attempts. This clearly gave Masvidal confidence as the fight was approaching the second round.

Masvidal’s confidence showed in the second round as he continued to nullify his opponents grappling game. As a matter of fact, Khabilov found himself on the ground with Masvidal postured over him in the middle of the round. Masvidal started to take control of the striking game as well by dictating where the action went and repeatedly landing body and leg kicks. Khabilov almost landed a takedown late in the second, but Masvidal popped right back up to his feet within moments. Though the first round didn’t have a clear winner, the scale was starting to tip in Masvidal’s favor.

The action started to pick up in the third round. Masvidal was in the middle of the octagon and picking his shots, but got popped with a spinning back kick that sent him tumbling backwards. Khabilov could never capitalize on it and by going for a submission so hard while Masvidal had his composure, he tired himself out as well. The rest of the bout saw two exhausted fighters going for takedowns and submission attempts. It was an incredible display of heart by both men.

In the end, it was Khabilov that would walk away with his hands raised.