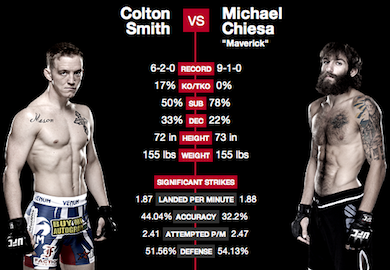 This bout was competitive right from the get go.

After Smith got lit up by a combination from Chiesa, he looked to take the fight to the ground. Chiesa was well prepared, however, as he hip-bucked his way to a sweep and eventually found himself on the back of Smith. Positioned with a body triangle, he was on his way to securing a victory by way of rear naked choke. After defending intelligently, Smith escaped the submission and jockeyed his way into position for a rear naked choke of his own! Chiesa was standing this time, and he slammed his way out of trouble. Both competitors made it back to their feet towards the end of the round and touched gloves as a sign of respect.

It seemed as if the rear naked choke was destined to end this fight, though.

Smith looked to take the fight to the ground early on in the second round, but Chiesa countered and executed a throw takedown that saw Smith land on his head; it looked like an accidental spike. Smith was clearly loopy from landing on his skull and this allowed Chiesa to lock up the rear naked choke, forcing the referee to stop the fight.