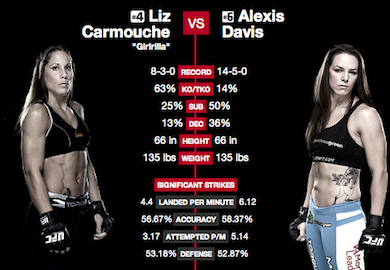 The story of the first round revolved around unchecked leg kicks. Liz Carmouche saw early success with outside leg kicks, but Alexis Davis was answering with inside leg kicks of her own. Neither woman was checking their opponent’s leg kicks, but it seemed as if Carmouche was hobbling in the middle of the round. She started to check the kicks, but abandoned it and tried to counter with punches of her own. Other than a few big punches landed by both women, the leg kicks of Davis is what gave her the round.

Alexis Davis suffered a cut over her eye in the beginning of the second round and it seemed as if Carmouche finally got the advantage, but that was not the case. It was an illusion as though Carmouche connected with some hard shots, Davis was separating from the action with impressive and fast combinations of her own. Once Carmouche started to check the inside leg kicks, Davis would intelligently switch to the outside leg kicks which were not defended. Davis eventually found herself on top of Carmouche in side control but it led to nothing. Carmouche postured up and grappled her way on top of Davis, but it was too little, too late as the horn sounded soon after she gained position.

Alexis Davis continued to grind out her opponent in the final round as she pressed Liz Carmouche against the fence and landed knees to the body. Carmouche would rarely check a leg kick, but she continued throw a strong shots afterwards that barely connected. The end of the round saw Davis press the action, landing knees and throwing combinations. Carmouche landed an uppercut as the horn sounded, signaling the end of the fight. The two ladies touched gloves as a sign of respect and both fighters looked battered and bruised.

Two of the judges awarded all three rounds to a very active Alexis Davis.