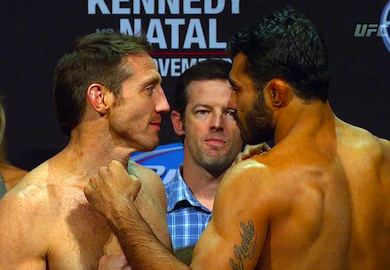 Today the UFC is giving back to the United States Armed service men and women with ‘UFC Fight Night 31: Fight for the Troops 3 – Kennedy vs. Natal.’

Straight from Fort Campbell in Kentucky, Middleweight fighter and U.S. Military combat veteran Tim Kennedy will face off with Brazilian import Rafael Natal in the main event of the evening.

Round 1 – They touch gloves and we are underway! We have a bit of a feeling out process. Smith lunges for a hook but Chiesa answers with one of his own as he’s backing up. Smith goes up high and almost connects with a kick. Chiesa hits a right straight/body kick combo but Smith clinches and is looking for a trip takedown. Smith lands the takedown and is on top of Chiesa, but Chiesa hip-buck sweeps and is now on top of Smith. He has a body triangle locked in place and Chiesa is working a neck crank that can easily be transitioned to a rear naked choke. Smith is out of danger of the submission but is still locked in the body triangle. Smith is free and he is up. He takes the back of Chiesa, but Chiesa is back to his feet and Smith slips off. Smith lands another takedown and now has Chiesa’s back. He has both hooks in on a standing Chiesa and is looking for a rear naked choke. He’s got it locked in tight. Chiesa slams his way out of it by lunging forward. Smith is now working on a kimura. Chiesa makes his way back to his feet and they both high-five. A lot of respect between the two men. Smith 10-9

Round 2 – Smith shoots for a takedown right away but Chiesa stuffs it and is having none of it. Back in the middle of the octagon, Chiesa is landing lunging right straights. Smith wants to get the fight back to the ground and pushes Chiesa against the fence. Chiesalands a trip takedown and has Smith’s back! Chiesa secures a rear naked choke and the referee ends the fight! Smith went down hard on the throw and it looked like he was knocked loopy from that.

Round 1 – Khabilov lands a HUGE overhand right after faking a shot and changing levels. Masvidal answers with a simple leg kick. Masvidal lands a lunging right straight. Masvidal just dodges a heavily-swung combination. Khabilov hits another right— this time a hook. Masvidal takes a shot to the body and eats another right. Khabilov is starting to work the body. Masvidal seems to have abandon his leg kick offense and is on serious defense mode. Masvidal is doing well dodging these overhand rights. Masvidal presses forward and hits a jab. Masvidal clinches, knees the body and pushes off. Khabilov looks for a takedown but it’s successfully defended. Khabilov hooks as he eats a shot to the body. Flying knee from Masvidal and he ends up on his back. He quickly makes his way back to his feet. This is a pretty even fight. Khabilov shoots for a takedown with ten seconds left but it’s stuffed again. 10-9 Khabilov

Round 2 – The two take to the center of the octagon rather quick and are exchanging one-off strikes. Leg kicks from Masvidal and level-changing rights from Khabilov. Khabilov continued to go body-head and it’s not working all too well. Masvidal is starting to push forward and dictate where in the octagon the action is going. Masvidal is landing leg and body kicks and he’s starting to gain confidence. Khabilov’s grappling gain is essentially nullified. Khabilov’s mouth is wide open. Khabilov gets popped with a left. Khabilov lands two body shots and hits a nice right that makes Masvidal smile. Masvidal lands a takedown and is trying to throw some vicious elbows. Khabilov makes it back to his feet and shoots for a takedown but barely gets one; Masvidal is back to his feet seconds later. They circle around the octagon until the horn sounds. 10-9 Masvidal.

Round 3 – Masvidal takes the middle of the octagon and is looking to pick his shots. He throws some serious blows here and there but none of them connect. Khabilov counters with shots of his own and is clearly on the defense. He lands a spinning back kick that CRACKS Masvidal in the skull! Masvidal falls to the ground but has his composure. Khabilov dives on him and is looking for an advantageous position. They eventually make it back to their feet. Amazing sequence. Masvidal has a lot of heart. He shoots for a takedown of his own but Khabilov counters. Masvidal is persistent, though, and he’s back on top. Khabilov hip escapes and they’re back to their feet. Masvidal presses Khabilov against the fence, but he escapes. Both men are tired and are standing in the middle of the octagon, gasping. Masvidal tries the spinning back kick but gets taken down. Khabilov has his back and Masvidal rolls out of it. They’re back on their feet and Masvidal stuffs another takedown attempt. They switch defending takedowns and submission attempts until the end of the round. Great show of heart by both. 10-9 Khabilov.

Round 1 – Romero is working the oblique kicks. Markes throws a blocked high kick. Markes landed a takedown and looked for a submission but Romero pops right back to his feet. Markes gets popped with a right hand and it wasn’t pretty. Romero is approaching the striking game from a lot of different angles that are making him susceptible to takedowns and Markes lands a second takedown. This time, Romero does not pop right back up. Once again he looks for a kimura but Romero spins out. Romero cracks Markes with a left hand. Romero shot for a takedown with ten seconds left in the round but Markes slipped right out of it because of how sweaty he was. 10-9 Markes.

Round 2 – Romero is quick to take the middle of the octagon and whiffs on a hook. He eats a leg kick. Markes eats a hard kick to the body, and then eats a solid knee. Markes gets tagged with two very hard left straights. Markes answers with an uppercut. Markes is not shying away from the striking game, though, and he’s landing with some soft shots of his own. Markes is in the clinch of Romero and was about to throw some knees, but Markes collapsed to his knees. They’re both back standing in the middle of the octagon. Markes is not moving his head a lot and he’s getting popped. Markes lands a soft right straight. Romero lands another left over the top. Markes eats a HEAVY kick to the body and falls down. It looks like he’s inviting Romero to the ground and Romero isn’t falling for it. Romero almost connects with a heel kick. Markes’ kick is blocked. Markes’ flying knee doesn’t it its target. They’re turning up the volume of strikes and are both connecting, but Romero is slipping and rolling the strikes which are reducing the force behind Markes’ punches. Romero takes this round. 10-9 Romero.

Round 3 – Markes shoots for the takedown but fails. He invites Romero to the ground but he declines. Romero accidentally pokes Markes in the eye and the fight resumes quickly. Markes lands a left hook. Romero lands a brutal left hook that stuns Markes and this allows Romero to get in a couple follow up shots. Markes is still standing and regains his composure. After a couple body shots, Markes eats a serious left hand that drops him. He is lying on the ground and Romero jumps on him. He gets a shot in before the referee peels him off— fight is over.

Round 2 – Carmouche is still not checking the kick but she pops Davis with a hard right hand the opened up a cut over Davis’ left eye. Davis tries to step inside, but Carmouche pops her with a right hand. As she was backing up, Carmouche ate a couple shots herself. Davis is getting the better of these exchanges, but it doesn’t seem it as she’s the one with blood pouring down her face. Davis is still pressing the action and dictating where the fight goes, constantly forcing Carmouche to fight her way off the fence. Once one of Davis’ inside leg kicks are checked, she switches to the outside leg kick which goes unchecked. Davis lands a takedown and is in side control. Carmouche eventually grapples her way out of it and ends up on top of Davis. Round ends. 10-9 Davis.

Round 1 – Kennedy’s stance is low and he catches Natal’s leg kick. Kennedy lets go. Natal connects with an outside leg kick. Kennedy gets clipped with a right. Natal eats another leg kick that causes him to rotate. Kennedy almost connects with a head kick. Natal tags Kennedy with a left hand. Kennedy whiffs on a right hand and gets taken down. Kennedy gets right back up. Kennedy gets tripped up after a leg kick. Tim Kennedy is sporting a welt on his left leg and it doesn’t look pretty. Kennedy misses with a straight kick and a spinning heel kick. Tim Kennedy lands a left hook on Natal and he is out! Kennedy dives on top of him and pounds him with repeated fists. The referee pulls him off and the fight is over.

Tim Kennedy defeated Rafael Natal by way of Knockout (Punches) 4:40 of Round 1