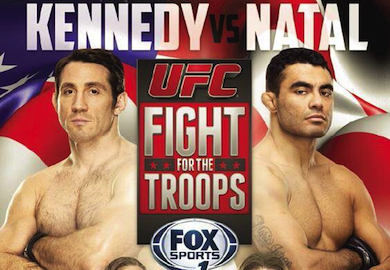 Knockout of the Night: Tim Kennedy
Tim Kennedy made the troops in attendance proud tonight with his knockout victory over Rafael Natal. Having served for his country like those in attendance, Kennedy knew that he needed to provide the crowd with something they would remember for years to come. What better way to send the troops walking away than with a knockout victory? Kennedy was taking punishment early on in the first round by eating repeated leg kicks, but he answered with a hook of his own that sent Natal crashing to the mat. Kennedy jumped on his opponent only to be pulled off by the referee, and the crowd went wild.

Submission of the Night: Michael Chiesa
Both fighters almost put each other way in the first round with rear naked chokes, but they defended intelligently and made it to the second round. Smith was looking to take the fight to the ground early in the second round but Chiesa dumped him on his head, which in turn knocked Smith a bit loopy. It wasn’t quite a spike to the head but it was very close to it. With Smith dazed and confused, this let Chiesa set up and execute yet another rear naked choke attempt. This time, it would end the fight.

Fight of the Night: Rustam Khabilov vs. Jorge Masvidal
Within seconds of the opening round, Khabilov popped Masvidal with a vicious overhand right. That strike promised us two things for the rest of the bout: Khabilov was dedicated to throwing thunderous shots from the get go and Masvidal could absorb them while pressing forward. Both men put on an amazing display of heart and put on the most exciting performance of the night. As Khabilov’s grappling was shut down in the first two rounds, it looked as if Masvidal’s confidence was growing and he would become more comfortable in his striking in the second and early on in the third. Halfway through the last round, though, Khabilov connected with a spinning heel kick that sent Masvidal to the mat. He had his composure, but from there on it was a scramble to see who could win the round. Khabilov would be the one who had his hand raised at the end of the night, but both men get to take home handsome bonus checks.