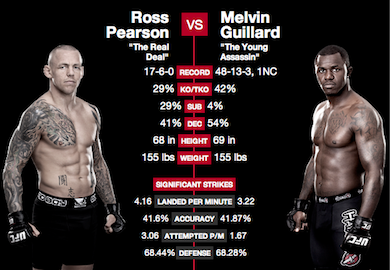 The fight was off to a fun start with both fighters connecting some hard shots. Guillard was taking some punishment early on in the first round, but he turned up his speed and connected with numerous shots. Guillard was starting to take control of the fight until Pearson threw a wild jumping knee. It barely connected, but Guillard caught him and turned toward the fence. This is where things got tricky.

The replays proved that the first knee was, indeed, legal but the second was an illegal knee to the head of a downed opponent. Pearson suffered a cut on his forehead that caused the doctor some concern and the fight was called off. It was ultimately ruled a no contest.