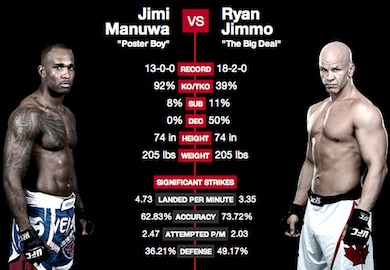 Jimi Manuwa put on a great display of power and speed throughout this bout.

While Ryan Jimmo was never in any serious trouble in the first round, Manuwa dictated where the fight went with his grappling. While Jimmo was pressed against the fence, Manuwa crashed his knees into Jimmo’s thighs. After a few of those knees, Jimmo was limping back to the middle of the octagon whenever the referee separated them due to inactivity. When in the middle of the octagon, Manuwa cut off Jimmo’s strikes with the speed of his own.

Round two saw much of the same action. Jimmo was obviously not feeling too confident in his striking and showed it by constantly pressing Manuwa against the octagon fence. The second time the referee separated the two due to inactivity, Manuwa threw a knee that connected to the skull of his opponent and Jimmo was sent walking backwards. After quickly gaining his composure, he bounced on his leg to reset his stance, then fell down. It looked almost as if he had an issue with his hamstring. Nonetheless, Jimmo was in serious pain and the referee called a stop to the fight.

Jimi Manuwa remains undefeated with fourteen career wins, three of them coming from inside the octagon.