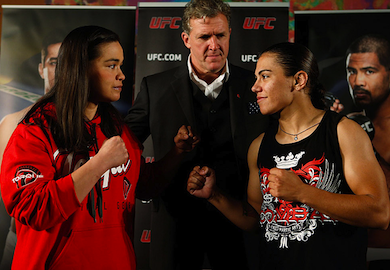 BJPENN.COM is up early to provide fans with live results in real-time right here in this very thread.

Tune in here for all the blow-by-blow and round-by-round action you can handle!

Round 1 – Due to technical difficulties, we were unable to recap this round.

Brad Scott defeated Michael Kuiper by way of Submission (Front Choke) 4:17 of Round 1

Round 1 – Whiteford opens the round up with a successful hook and straight. Hettes shoots for a takedown but it goes nowhere. Hettes gets the clinch but Whiteford overpowers him and presses him against the cage instead; not what Hettes was looking for. Hettes secures a takedown and he’s in side control. Within seconds, Hettes is in full mount. He takes Whiteford’s back, but Whiteford’s is against the cage so he doesn’t have much room to transition. We’ve the waiting game going on now because neither man wants to give up their position. Joe Rogan hates it when the crowd boos when two men are jockeying for position. Hettes frees some room up and locks in a body triangle on Whiteford. He’s looking for a RNC. Whiteford spins out of the body triangle and is right back to his feet. Hettes takes him down as the horn sounds. 10-9 Hettes.

Round 2 – Hettes catches a takedown and has Whiteford’s back again. Whiteford is taking big breaths; he’s carrying Hettes’ body weight all fight. Hettes locks up another body triangle. Whiteford spins around and is on top but Hettes counters with a triangle choke. He adjusts it and it seems like it’s locked up. Hettes secures the submission and Whiteford submits.

Jim Hettes defeated Robert Whiteford by way of Submission (Triangle) 2:17 of Round 2

Round 1 – Andy Ogle looks confident and Cole Miller looks fired up. They touch them up and we are underway. Ogle pops Miller with a straight. Miller connects with a straight high kick. Miller lands two nice right hands; he’s utilizing his reach early and often. Ogle doesn’t like it one bit and pushes Miller against the cage. Ogle is looking for a single. Miller is throwing short forearms, staying active while Ogle is looking for a takedown. Ogle takes Miller down, they scramble and Miller is now on top. Miller has Ogle’s back and his left arm trapped. The left arm is out, but Miller has a body triangle fully locked in. Half the round is remaining. Ogle is working slowly to get out, but is trying to save energy. Miller’s legs are wrapped tight around Ogle’s body. Time expires. 10-9 Miller.

Round 2 – Ogle moves to the center of the octagon right away and lands a couple jabs. Ogle pops Miller with a left hook. Ogle looks for a single but Miller’s takedown defense is good; his balance is great. Miller has an arm-in guillotine locked in. Cole has little-to-no leverage and it’s looking rough for him to finish the fight. Ogle keeps Miller’s back against the cage and escapes. The crowd pops for the hometown-boy. Miller has Ogle in his guard. Miller sweeps Ogle, gets an offensive position on bottom and transitions into a triangle! He switches to a omoplata but loses it and Ogle is back on top in Miller’s open guard. Miller spins Ogle around and transitions to an armbar attempt! This is the second submission attempt by Miller. Ogle switches out and Miller has Ogle’s back. Miller locks in the body triangle again with 30 seconds remaining. 15 seconds. Horn. 10-9 Miller.

Round 3 – Ogle is doing a great job at the start of this round, utilizing his combinations to catch Miller off guard. Ogle takes Miller down and is in Miller’s guard. Ogle is firing big shots that are hurting Miller! It’s not fight ending-worthy, but they can build up. Ogle is wildly throwing his arms around and Miller is looking to catch one of them. Miller looks a bit tired. Miller has his shin on Ogle’s stomach and is looking to transition but Ogle sees what he’s doing and moves away from it. Miller is slowly but surely moving his hips out. Ogle ends round in top position. 10-9 Ogle.

Round 1 – Sexton’s stance is low. She gets popped by a hook and is backed up against the cage. Andrade is throwing bombs and they’re connecting every now and then. Sexton weathers the storm and survives. Sexton is looking for a trip takedown but Andrade has her balance and turns the tables. Sexton’s back is against the fence again. Sexton’s nose is busted. Andrade is looking to end the fight early. Sexton throws a nice right hook. Sexton connects with an inside and an outside leg kick. Andrade is connecting with combinations and knees to the body; Sexton is going to have a rough second round if she makes it there. She’s taking a decent amount of punishment. Two minutes left. Sexton eats a right hook. Sexton connects with a jab and a weak knee to the body. Andrade takes her opponent down and is in side control. Sexton is up. Andrade hits a hook and sprawls, defending a Sexton takedown attempt. Sexton has a welt on her forehead. Sexton took an illegal knee; her hand was on the mat as Andrade threw a knee. 10-9 Andrade

Round 2 – Rosi eats some punches early on and her legs are starting to look weak. Sexton answers with some bombs and whenever she throws her punches, Andrade counters with brutal blows herself. Sexton eats an inside leg kick and two right hands. Sexton is pressed against the fence, eats two hooks and a knee. Her face is lumping up badly. Andrade looks like Wadnerlei Silva, hunched over and ready to throw bombs every second of the fight. Sexton eats a left hook and a right straight. She eats a right hook, left hook, right straight, right uppercut… just too many punches. She’s taking a beating and she isn’t giving a valiant effort in fighting back. She’s not going to quit and that’s not a good thing for her health. Rosi gets backed against the cage again and eats a left straight. Andrade connects with a head-wobbling right hook. Andrade connects with kicks to the body. Sexton is wobbling. Sexton secures a takedown with ten seconds left and Andrade gets back up before the horn sounds. 10-8 Andrade.

Round 3 – Sexton’s strikes have close to no power behind them. Her leg kicks look like leg taps. Andrade nails a jab and a left hook. Sexton shoots for a takedown, Andrade sprawls and now Sexton’s back is against the fence. Sexton is bad in this position. Andrade backs away to the middle of the octagon. Sexton lands a huge right hand and Andrade just eats it. Andrade answers with a right hand of her own. Andrade connects with a powerful kick to the body. Sexton is worn out. Andrade connects with two more kicks to the body. This is eerily similar to Cain vs. JDS III; Sexton is taking an unnecessary amount of punishment. Sexton eats an uppercut and a right hook. Sexton eats some more shots and Sexton shoots for a takedown. Andrade defends. Andrade throws bombs with ten seconds remaining. Time expires. 10-9 Andrade.

Round 1 – Barnatt has a huge height advantage. Craig is very active at the open of the fight, throwing hooks and leg kicks. He’s connecting rarely. Craig lands a leg kick. Barnatt seems very methodical with his striking. Barnatt lands a beautiful right hand. Craig is very confident in his striking; he’s striking close. Craig lands two hooks then avoids two jabs. Barnatt is looking to find his distance and is having no success. Craig lands another leg kick. Barnatt eats a left to the body and then gets bagged by an overhand right. Barnatt tags Craig with a right and left and he tumbles backwards! Barnatt tries to capitalize but Craig gets back to his feet. Barnatt lands a jumping knee to the body. Horn sounds. 10-9 Craig.

Round 2 – Craig is back in the middle of the octagon, hopping around. His balance has recovered but can he eat another one of those shots? Craig lands a hard jab. Barnatt lands a nice right hand of his own. Craig whiffs on a high kick and Barnatt counters with a right of his own. Barnatt drops Craig again; he cracked him with an uppercut! Barnatt prematurely celebrates. Craig is back to his feet only to get thrown to the ground. Barnatt has Craig’s back and is in position for a rear naked choke. Craig submits! Barnatt still undefeated.

Round 3 – Hallman almost lands a takedown but as they scramble to get back up they both throw wild shots. Iaquinta hits a head kick. Hallman ducks and throws a right hook that barely connects. Iaquinta connects with a right hook after eating an inside leg kick. Iaquinta pokes Hallman in the eye, badly. Hallman says he can continue, and we are back underway. Iaquinta is moving fluently, but Hallman lands two takedowns in a row. They lead to nothing though as Iaquinta gets back to his feet within seconds. Iaquinta eats a leg kick and a right hook. Iaquinta presses Hallman against the cage and lands a takedown. He has Hallman’s back. Hallman gets back up only to get taken down again. Then he gets back up, and gets taken back down. Round ends with the two men trading glancing shots. 10-9 Iaquinta