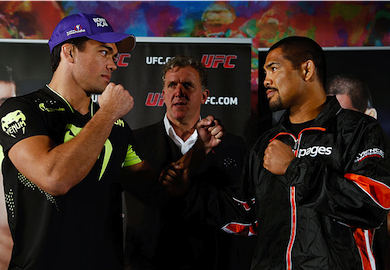 Today’s UFC Fight Night 30 event goes down across the pond from Manchester, England.

BJPENN.COM is up early to provide fans with live results in real-time right here in this very thread.

For your round-by-round and blow-by-blow updates from today’s Fight Night event tune in here at Noon Pacific Time.

RESULTS:
John Lineker defeated Phil Harris by way of TKO (Punches) 2:51 of Round 1
Nicholas Musoke defeated Alessio Sakara by way of Verbal Submission (Armbar) 3:07 of Round 1
Norman Parke defeated Jon Tuck by way of Unanimous Decision (29-28, 29-28, 30-27)
Jimi Manuwa defeated Ryan Jimmo by way of TKO (Leg Injury) 4:41 of Round 2
Melvin Guillard and Ross Pearson Fought to a No Contest (Illegal Knee) 1:57 of Round 1
Lyoto Machida defeated Mark Munoz by way of Knockout (Head Kick) 3:10 of Round 1

John Lineker defeated Phil Harris by way of TKO (Punches) 2:51 of Round 1

Round 1 – Sakara hurts him right away with a right hand. Sakara lands a takedown and is standing over Musoke. Musoke catches Sakara with a left hand! Musoke lands a left hook and Sakara is wobbly! Sakara lands a counter shot of his own that releases a cracking sound! Musoke presses Sakara against the fence and takes him down. He is in Sakara’s closed guard. Sakara throws up a hail-mary omoplata attempt and fails. Musoke transitions to half guard, then side control. He’s pinning Sakara’s left arm down. Sakara gets him back to side control. Sakara explodes out of the bottom and is standing over Musoke! He’s throwing bombs and lands a hard right hand. Musoke secures an armbar! Musoke wins by submission!

Nicholas Musoke defeated Allesio Sakara by way of Verbal Submission (Armbar) 3:07 of Round 1

Round 1 – Tuck’s stance is low and it looks like he’s ready to counter strike at all times. Parke checks a leg kick. Parke checks a high kick twice; his arms are taking damage. Parke hits Tuck with a straight left. Tuck connects with a right and Parke connects with a left; nice exchange. Parke forces a separation of the clinch with a couple hooks. Parke gets poked in the eye but the referee doesn’t see it and Tuck proceeds to attack. Parke takes a body kick. Parke lands a right cross. Parke’s counter lefts are starting to connect and they’re doing damage. Tuck often misses his right hooks and gets popped with left counters. Tuck hits an inside leg kick. Ten seconds left and Parke shoots for a takedown. He lands it. 10-9 Parke.

Round 2 – Tuck lands two hard kicks to the body. Parke wasn’t really attacking in the first, but he seems comfortable enough to throw some strikes that aren’t counters. Tuck seems to be fading; his strikes have a lot less power in them and they’re slower. Parke is starting to pick Tuck apart on the feet. Tuck gets popped with a right straight, then a straight left. Parke is connecting with jabs and utilizing them to set up lunging combinations. His constant change of pace is throwing Tuck off. Tuck barely connects with a jumping knee. Parke just took a big breath, but it seemed like a controlled big breath to regulate his breathing. 30 seconds left. Parke misses an overhand. Tuck gets stunned by a left. 10-9 Parke

Round 3 – Parke is continuing the punishment by connecting with body shots. Tuck is not throwing combos anymore; he’s throwing one punch at a time. Tuck’s team is begging him to take the fight to the ground but all he hears are the thuds from Parke’s fists on his face. Tuck connects with a nice shot to the body, but Parke continues to control the action and push the pace. Parke is nailing Tuck now with combinations and Tuck isn’t wobbling; it’s impressive. Parke looks just as crisp in the third round as he did in the first. Tuck is smiling and picking up the pace of the action. Parke throws some wild shots at the end of the fight and misses. Horn sounds. 10-9 Parke.

Round 1 – Jimmo opens the fight by taking it right to Manuwa right away. Manuwa catches a knee and tries to take Jimmo down, but Jimmo turns it around and pins Manuwa against the cage. Not much action happens while they’re there. The referee breaks them up and puts them in the middle of the octagon. Manuwa lands a big knee to the body and presses Jimmo against the fence. Manuwa is softening up the thighs by kneeing Jimmo’s thighs. Jimmo now has Manuwa pressed against the cage, and they switch positions again. Manuwa is going back to kneeing the thighs. The referee puts them back in the middle of the octagon. Manuwa lands a hard leg kick. Jimmo answers with a right hand of his own. Manuwa lands an inside leg kick. Manuwa lands a hook kick! Very impressive. Jimmo lands an inside leg kick of his own. Manuwa is really controlling this fight with his power and speed. 10-9 Manuwa.

Round 2 – Jimmo doesn’t want any of Manuwa’s striking game and presses Manuwa against the fence right away. After 30 seconds of inactivity, they get reset to the middle of the octagon. Manuwa fires off a body kick as soon as they get there. Jimmo just blocks a head kick. Jimmo lands a body kick, then eats a knee to the body. Manuwa has Jimmo pressed against the fence again and goes back to throwing knees. After landing a knee to the body and thigh, Manuwa’s back gets pinned against the fence. Manuwa throws a low knee. Replay shows it barely hit the cup. Action resumes. Jimmo almost lands a takedown but Manuwa defends it. Jimmo just rests on Manuwa’s body against the cage until the referee separates them. Now, Manuwa has Jimmo pressed against the fence. The difference with him is that he’s striking. They got back to the middle of the octagon and Jimmo eats a knee to the face. Jimmo’s leg gives out and he falls to the ground. He bounced on his leg and it gave out under him. It looks like a blown hamstring. Fight’s over.

Round 1 – Pearson looks fired up. They touch gloves and here we go. Pearson lands an inside leg kick. Pearson has his chin tucked. Guillard throws a bomb but whiffs. Pearson nearly lands a left hook. Guillard eats an inside leg kick. Guillard whiffs an uppercut. Guillard nails Pearson with a right hook and Guillard is quick to step away. Pearson gets nailed again. Pearson ducks under a right hook. Pearson eats a knee to the solar plexus. Guillard catches a flying knee, presses Pearson against the fence and lands two illegal knees. Action pauses. After the replay, you can see the first knee was legal. The second knee was in question; Pearson’s hand may have been on the mat. They are stopping the fight because of the cut.

Round 1 – Machida walks out to “In The Bushes” by Oasis. Clearly, he wins the walk-out song contest. We’ve a long feeling-out process with both fighters looking to find their distance. Nothing we didn’t expect from a Machida bout. A minute and a half pass with no strikes landed. Munoz shoots for a takedown but Machida side steps it. Machida lands a body kick. Machida lands another body kick after backing Munoz against the cage. Machida is controlling where the action goes which is a huge advantage in a round that doesn’t have much action. Speaking of action, Machida lands a head kick that knocks Munoz out! The referee steps in and the fight is over.

Lyoto Machida defeated Mark Munoz by way of Knockout (Head Kick) 3:10 of Round 1