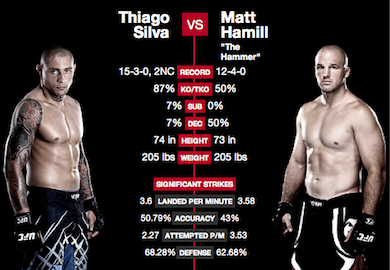 Despite missing weight, Thiago Silva still had the crowd in Brazil on his side. Who wasn’t expecting that, though?

Both Thiago Silva and Matt Hamill showed fatigue early on in the fight, which slowed the action down after the first round.

Silva was looking to take away Hamill’s wrestling advantage by attacking the lead leg, and it was a successful strategy that eventually became his main source of offense. By the time the third round rolled around, Hamill was wincing with every leg kick that connected.

Silva simply out-struck and out-grappled his opponent as he marched his way to a unanimous decision victory.