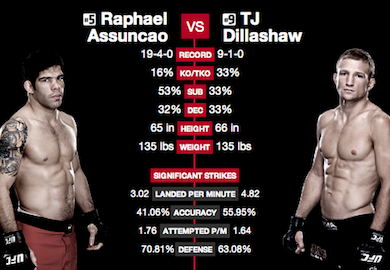 We are only one fight into the card and we already have a “Fight of the Night” candidate. This was the true definition of a back-and-forth fight with both fighters getting one-round a piece, which lead to a very exciting round three.

TJ Dillashaw secured the first round after he took advantage of a failed takedown attempt by Raphael Assuncao. After getting his opponent’s back, Dillashaw almost locked in three separate rear naked chokes. Assuncao was lucky to see the end of the first round, brilliantly defending all three attempts.

Dillashaw was still confident from the previous round, but Assuncao stayed clam and wasn’t playing it desperate. He was patient and countered all of Dillashaw’s strikes and played a brilliant, careful defensive game that awarded him the second round.

The third round was, as expected, extremely close. Dillashaw realized Assuncao was countering his strikes well and slowed down the action, while Assuncao was still waiting to defend the combinations. Assuncao did just enough work in the third to take the fight, winning it by split decision.