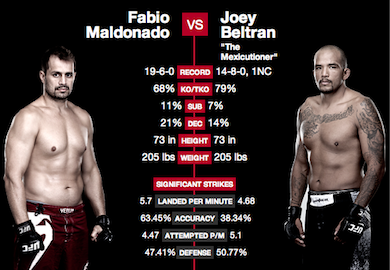 This was not the knockdown, “drag-em-out” brawl that most wanted.

A lot of the fight saw Joey Beltran pushing Fabio Maldonado against the octagon fence, but not committing much offensive action. Beltran was not “working” and if he was trying to secure a takedown, he wasn’t doing a very good job of it. Every now and then he would land a decent shot while within the clinch but Maldonado was really outstriking Beltran even though he was in the disadvantageous position.

Maldonado really took control of the fight in the second round where they spent most of the action in the middle of the octagon. Beltran absorbed multiple punches and knees to the body and that’s where things started looking bleak for him; it was clear his gas tank was close to empty.

Maldonado stayed busy enough in the third round to earn a split decision victory.