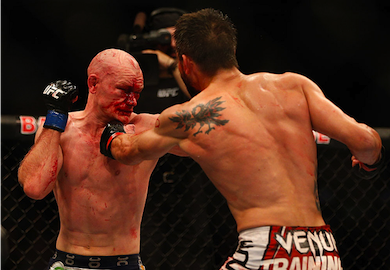 The Indiana Gaming Commission’s athletic division has released the medical suspensions list from last night’s UFC Fight Night 27 event and seven of the evenings participants have been forced on the sidelines for various injuries.

UFC Fight Night 27: Condit vs. Kampmann took place in front of a packed-out Bankers Life Fieldhouse in Indianapolis, Indiana. In the main event Martin Kampmann opened up with a dominant first round full of takedowns and successful grappling exchanges. However, his success was short-lived when Condit found his range in the second and punished Martin until referee, Herb Dean, was forced to stop the action in the beginning of the fourth due to a vicious striking onslaught from Condit.

Martin Kampmann received a 30 day suspension for his injuries during the brutal main event.

The rest of the medical suspensions are as follows: