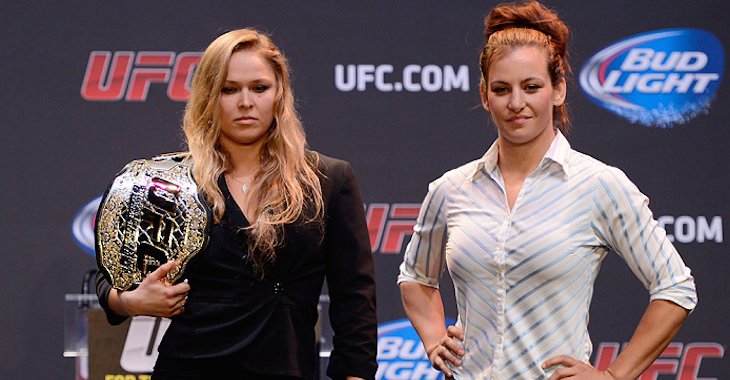 If the UFC sticks to the potential plan of putting Conor McGregor, Jose Aldo, Ronda Rousey and Miesha Tate on the same card in Texas, they could shatter every record the likes of Brock Lesnar, Anderson Silva and Georges St-Pierre set.

With Bethe Correia out of the picture, Rousey now has her sights set on another bantamweight rival in Miesha Tate. Tate secured a title shot when she defeated Jessica Eye by way of unanimous decision at “UFC on FOX 16”. Tate has lost twice to Rousey already and the third opportunity at dethroning the champion could be her last.

When asked when she would like to fight Tate, Rousey told Fox Sports 1, “I would like to be on the Aldo/McGregor card if possible. That would be really cool.”

Dana White has expressed interest in booking McGregor’s date with Aldo in December at the AT&T Stadium in Dallas, Texas. White talked about the fight after “UFC 190”, telling Fox Sports 1, “That card is probably going to be in Dallas— Texas stadium. December, I hope so. We’re working on it.”

Could this be the biggest event of all time if all the stars actually align?