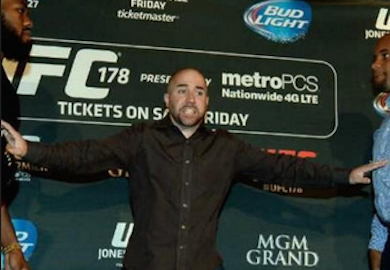 Monday in Vegas, Jon Jones and Daniel Cormier got in a heated exchange that ended with a ruined UFC media day.

During the Jones/Cormier pre-fight brawl, UFC executive Dave Sholler was thrown aside by the light-heavyweight champ when he tried to halt the out-of-competition action.

Have to admit that u guys are KILLIN me w/ internet memes, videos, comic book strips. Who's doing @JRsBBQ video of me falling thru backdrop?

Alright guys…. @sholler_ufc is in one piece. Crazy days at the @UFC office! https://t.co/H38HE2wBKb