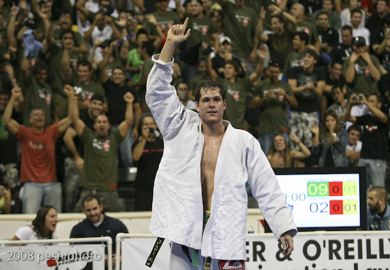 Roger Gracie (6-2 MMA, 0-1 UFC) will not be getting a second UFC fight. The former Strikeforce fighter made the crossover to the UFC this year, debuting against Tim Kennedy at UFC 162 in July. Gracie was able to win the first round against Kennedy, but that was the extent of his success as he went on to lose a unanimous decision and ultimately his place in the UFC.

Ivan Raupp of Combate.com confirmed that Gracie’s UFC 162 fight was the last one on his four-fight contract, which was a continuation of his Strikeforce deal. Apparently the UFC did not feel his contract was worthy of renewal and thus he is now a free agent.

According to the article, Roger is considering a return to the light heavyweight division in whichever promotion he signs with next. Which promotion Gracie will sign with is yet to be determined.

World Series of Fighting already has Gregor, Igor, and Rolles Gracie on their respective roster, so that is a definite possibility. Raupp’s article also suggests that Roger’s camp is interested in potentially joining Bellator.