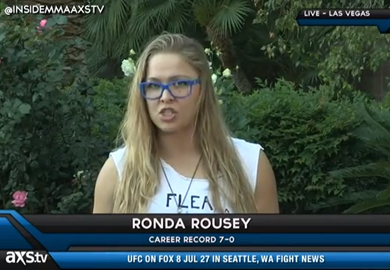 UFC Female Bantamweight Champion, Ronda Rousey, took to the airwaves to give her thoughts on one of the most controversial topics in MMA today, Fallon Fox.

In her interview with AXS TV the female champ gives her take on whether or not the transgendered fighter has an advantage in the cage.

“In Fallon Fox’s case, she went through puberty as a man. Though I do believe her identity is that of a woman, at this point in her life, it’s just not scientifically possible to make her body exactly equal to that of a woman.”

“Transgender fighters should be taken on a case-by-case basis, and if you already developed through puberty as a man, you shouldn’t be allowed to fight as a woman.”