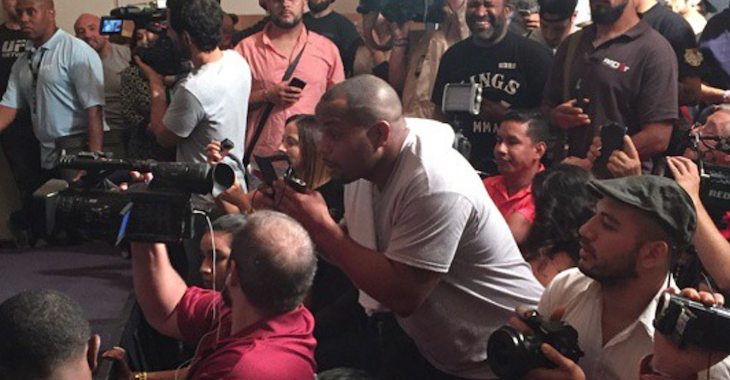 It’s not everyday you see a UFC champion jostling for position with the media in order to get pictures of other UFC fighters.

That’s the scene depicted in the picture below, posted by Daniel Cormier. It’s a pretty funny image to see.

Chances are he was trying to get a good shot of his friend and teammate Cain Velasquez, when he squared off with Fabricio Werdum.

Today at ultimate media day I was able to change places and get behind the camera. So much fun watching ur friend in the spotlight and back doing what he loves to do. Got some great photos on my great camera haha my phone lol. I’m so excited to watch this fight. These two men are ready to give u all a great show. But I am screaming from the top of the highest mountain #teamvelasquez #vivamexico @ufc 188 o yea look at master Rafael cordeiro in the back laughing photo credit @arielhelwani