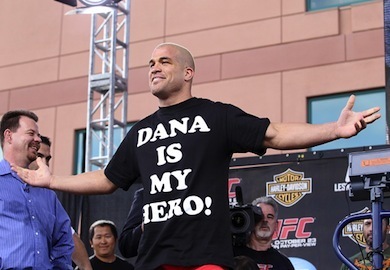 The UFC and Bellator went head to head for the first time earlier this month during UFC Fight Night: Jacare vs. Mousasi, and Bellator 123, which took place the same night, in the same town.

Now it appears that the UFC and Bellator will once again go head to head on the same night, but this time not in the same state. UFC 180 will take place from Mexico, whereas Bellator 131 will take place in San Diego. That didn’t stop the UFC from blocking Bellator from using one of their favorite venues in Anaheim.

Instead Bellator was forced to use a venue in San Diego, which was fine with Ortiz.

“We’re in San Diego, I have thousands of fans down there, they get to watch me live in their own backyard,”

The UFC has yet to respond or comment on Ortiz’ allegations.