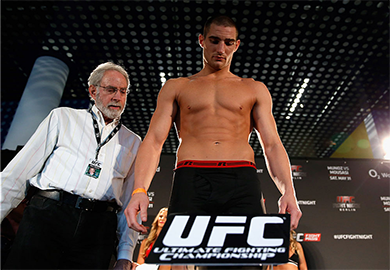 A slow-paced technical fight is a tough one to watch after seeing such an exciting finish from the last bout. Luke Barnatt and Sean Strickland were on the wrong side of a chorus of boos from the crowd who voiced their disapproval of the fighter’s lack of action. The fight was perfectly fine and entertaining to watch, but the crowd was simply still fired up from the last bout.

Luke Barnatt’s reach was a huge concern of Sean Strickland who wanted to keep his distance. Strickland’s back was consistently to the cage and he was forced to circle to his left the entire fight. He stuck back and counterpunched brilliantly in the first round, but Barnatt started to take control in the second and third rounds. Barnatt did not land anything big but it seemed like he was doing enough to stay ahead of Strickland on the scorecards.

Strickland’s lack of will to engage in combat was explained after the third round ended when he told Barnatt he was fighting with one hand. Nothing has been confirmed, but it is believed he broke his hand in the middle of the first round which caused him to abandon his counter-punching strategy that was working so well in the first.

The judges’ decision baffled fans and even the commentators as Sean Strickland was announced the victor. One judge came far out of left field and gave Sean Strickland all three rounds!