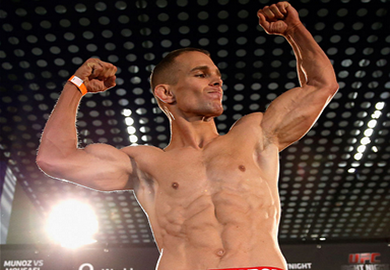 Lightweight Nick Hein put on a great showcase of his skills in his octagon debut today. He is a decorated judoka and his transition into mixed martial arts has been successful. Joe Silva invited him to the UFC hoping his success would continue and Hein did not disappoint him with his performance against Drew Dober today.

Hein executed a handful of judo throws in the first round which brought the crowd to life. He wasted little movement and his striking game was impressive as well; the way he threw punches from his hips generated a lot of power.

Despite taking a lot of punishment in the first, Dober showed great tenacity by continuing to press forward and it payed off for him in the second round. While Hein was going for a rear naked choke, Dober made it back to his feet and slammed Hein on the canvas. From that point on, Dober took control of the round with his top-control game.

Nick Hein came back twice as strong in the third and final round when he really started to attack the right eye of Drew Dober. Dober had suffered a cut over his eye in the first round that really started to open up in the final five minutes. The doctor almost called for a stoppage but he allowed the fight to continue. Hein repeatedly popped Dober with combinations in the closing moments of the fight and it was almost a done-deal that he had won by way of decision.

The announcer stated what everyone in the arena wanted to hear: Nick Hein picked up the win by way of unanimous decision.