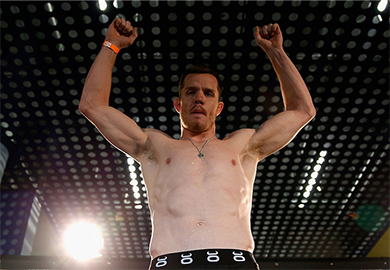 C.B. Dollaway and Francis Carmont were featured in the co main-event where the pace of the fight slowed down as it went on. The first round was exciting from start to finish as they exchanged shots and taunts without caution. Dollaway started to tally up leg kicks that were going unchecked and followed one up with a punch that dropped Carmont. It was not clear whether Carmont was simply off balance or if he had been clipped, but the knockdown led to a grappling contest on the mat where Dollaway started to shine.

When the fight was standing, Carmont was in full control. Once Dollaway needed a crutch to lean on, he shot for a takedown and absolutely dominated there. He transitioned at will and found full mount multiple times but did nothing with it.

Once the fight went to the ground Carmont was content with staying on his back for some reason. Commentator Dan Hardy had mentioned that it always looked like Carmont was waiting for a scramble to start where he would try to capitalize on, but said scrambles never happened and he just gave Dollaway time in top-control.