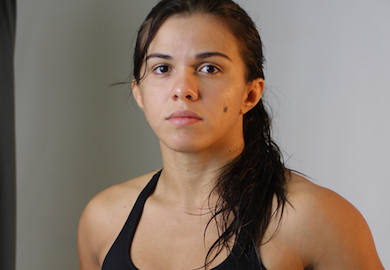 This is some history making news for you guys (and gals). The UFC has announced its first ever strawweight fight. For those who might not be sure what that is, it’s the 115 lb. weight division. The first fight in the new women’s division will be…… Claudia Gadelha (pictured) vs. Tina Lahdemaki. UFC officials confirmed the fight.

Gadelha is the most known of the two fighters. She is 11-0 and was acquired by the UFC from Invicta in that deal that brought 10 strawweight fighters over to the UFC. Gadelha trains with Nova Uniao and is a Brazilian jiu-jitsu world champion.

Lahdemaki fights in Finland, which is also her home country. She is also undefeated at 5-0. Lahdemaki will be dropping from 125 lbs to 115 lbs for her debut in the octagon. She has submitted her last two opponents.

Gadelha is most likely going to be the favored fighter going in to this fight, but it’s a debut fight for both women so anything could happen. The fight will take place on the UFC Fight Night Atlantic City card that features Donald Cerrone and Jim Miller as its main event. The event takes place on July 16.