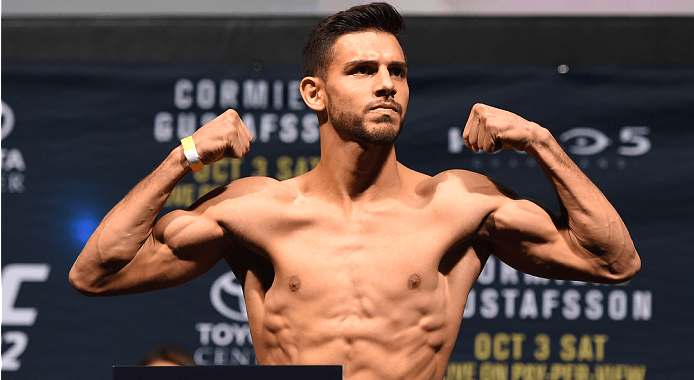 Th fight started and it took about 35 seconds for anyone to land anything. It was a leg kick from Yair. Hooker was using a lot of movement from side to side, while Yair just kept coming forward. Yair threw a few big spinning kicks, bit missed. Eventually Hooker moved in for a clinch, and got Yair on the cage. From there he worked for a takedown. The fight went down briefly after a trip, but the fight went back to the feet moments later.

Hooker kept the pressure on, pinning Yair on the cage. After a failed trip they broke away and start throwing punches. In the final second Yair threw a crazy rolling kick, it didn’t do anything.

In the second Yair continued to throw spinning attacks, with elbow, kicks and what not. Hooker moved in, got the clinch again and pushed the fight to he cage. Yair dropped down, it looked like he did it on purpose to go for a leg lock. He got back to his feet and they moved away from the cage. At the two and a half minute mark they really started throwing. These guys were going nonstop. Hooker was the aggressor now, moving forward. Yair continued to land big spinning kicks to the body. With about ten seconds left Yair shot in and got a big takedown.

They clinched up early in the third round, but only for a moment. Then Yair got hit in the place that makes gown men cry. They resumed. Hooker started to attack the body. It was Yair who looke dot clinch. The fight went to the ground. Yair looked for a heel hook, but lost it and Hooker took top control. From there Hooker worked from full guard. Yair kept his legs up, which kept Hooker from landing anything too big, but still, he kept contort and landed when he could. The referee stopped the fight and had the doctor look at a cut on Hooker, right above his eye it looked like. The fight continued and it was Hooker walking Yair down. They really started swinging at each other until the fight ended. Good fight, close fight.