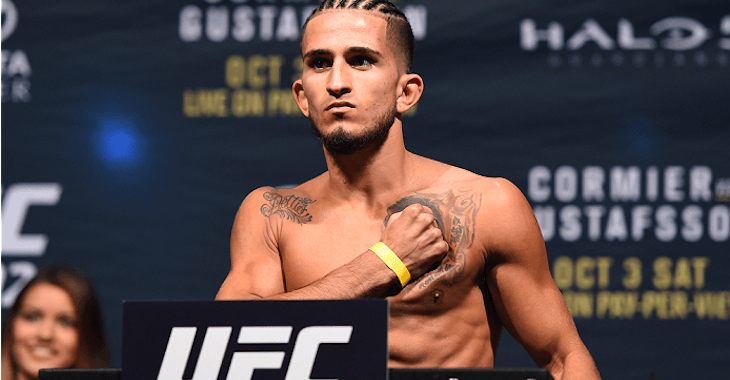 In the second fight of the night the flyweights faced off when Sergio Pettis took on former title challenger Chris Cariaso.

Early on in the fight Cariaso threw a body kick, Pettis caught it, then kicked his other leg out from under him. Cariaso went down and Pettis went down and took top control. Cariaso was able to get back to his feet. They went back to striking. Cariaso started landing some really nice body kicks. Pettis started landing his jab often. Pettis landed a really nice right hand. The, just moments later, Pettis dropped Cariaso with another right hand. Pettis jumped all over him, throwing a huge flurry of punches from top position. Cariaso was hurt but he managed to survive the round.

In the second Pettis was able to find a home for his jab. He eventually got Cariaso down and started working from top control. Pettis started working to advance his position. For some reason they get stood up by the referee. They go back to striking. After some exchanges on the feet, Pettis again shot in and got a takedown. Cariaso attempted to threat with submission but Pettis got out. Pettis stood up but wouldn’t let Cariaso get to his feet, just kept landing leg kicks from the top.

Cariaso got a takedown early in the third, Pettis threatened with a guillotine. He used it to get back to his feet, but in a scramble Cariaso got top position again. At one point Cariaso got caught with a big up kick. Most of the round took place with Cariaso on top, trying to land some ground and pound. In the final moments of the fight, Cariaso went for a heel hook and looked to have it. It was really cranking it, but Pettis held on and survived.