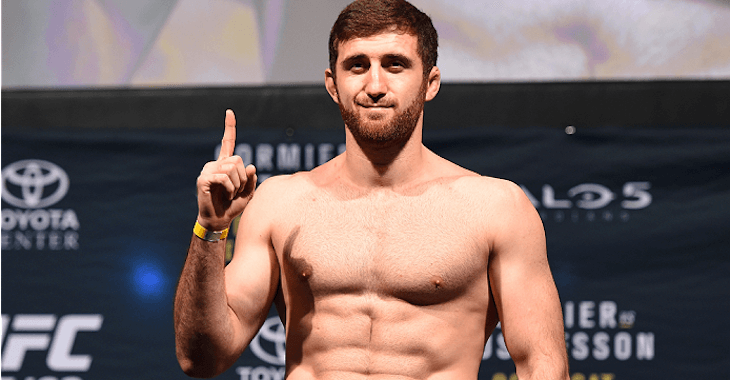 Shawn Jordan and Ruslan Magomedov fought in a heavyweight bout at UFC 192.

Jordan came out walking him down. After they exchanged briefly, Jordan put him on the cage and clinched. Jordan worked for the takedown and got it. Ruslan, with his back on the cage, tried to work his way back to this feet. He almost did before Jordan grabbed his feet and pulled them out from underneath him. Ruslan got to his feet and broke away from Jordan. However, Jordan kept the pressure on, walking him down.

Ruslan kept tagging him with counters.

In between rounds Jordan said that his rib was broken. Jordan was coming in but Ruslan landed a lot of punches with his back on the cage. Jordan came back and tagged Ruslan with a big punch, then clinched up with him. Jordan got him on the cage again and worked for a takedown. He wasn’t able to get it. Ruslan reversed and then broke away. Ruslan threw some head kicks, but they were blocked. Jordan moved in for the clinch. Ruslan reversed on the cage.

In the third round Jordan came in and Ruslan threw a question mark kick that looked like it landed. Jordan moved in, grabbed Ruslan and put him on the cage, but then got reversed. They separated and Ruslan kept landing nice kicks to the body and to the head. Jordan looked pretty tired, or perhaps hurt. His face was pretty busted up. Jordan got Ruslan on the cage again, then got reversed. They broke away and Ruslan landed some more nice punches, but there wasn’t a lot of power behind them.