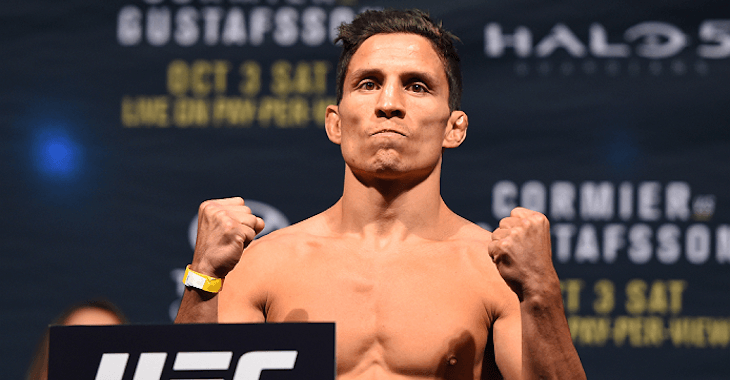 UFC flyweights Joseph Benavidez and Ali Bagautinov met in the octagon in a very important fight for the division.

There was a brief feeling out process, then Benavidez blitzed in with a big punch. It didn’t seem to land. They danced around some more and again Benazidez moved in quick with a punch. That seemed to be a plan, to explode with quick attacks. Ali landed a nice leg kick. Benavidez moved in, for what looked like a takedown, Ali sprawled and caught Ben and cut him open. Ali looked to only counter, and didn’t throw much as far as offensive strikes go. Benavidez’s cut was right on his eyebrow.

Benavidez’s striking really started to land in the second. It looked like connected a few consecutive head kicks. He also landed body kicks over and over again. Aside from a big punch here and there, Ali seemed content sitting bak and waiting to strike. Benavidez came in like he was going to clinch, then landed a nice right hand. Ali got Joe B down, picking him up and getting a quick slam before the round ended.

In the third Joe B came out with some big punches, but didn’t connect. Ali grabbed a kick and almost got him down but Joe B spun and jumped out of it. Ali was maybe a little more offensive with his striking in the third, but not much, he still waited for Joe B to throw. Ali was able to grab Benavaidez again and went for a takedown but Joe again rolled and got up right away. Close fight.