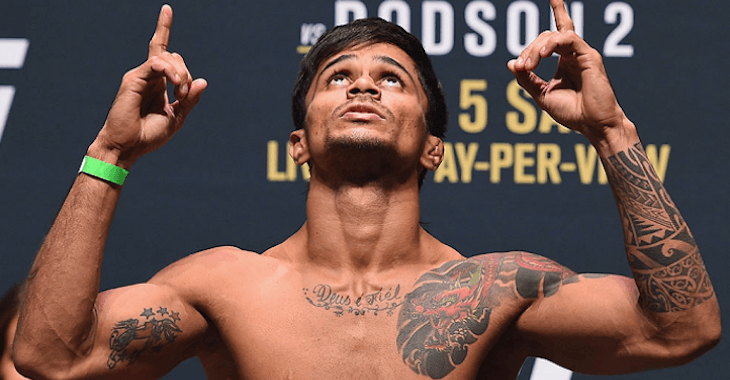 In the first fight on FS 1, Clay Collard took on Tiago Trator.

In the first round Collard kept the pressure up and looked to tie up and do damage. Eventually Trator got a takedown but was immediately reversed and Collard ended up on top. Fighters go to their feet, but it was Trator who went right back to the takedown. This time he kept Collard there and looked to do some damage.

Collard got to his feet and tried to move away but Trator jumped on his back and looked to lock in a rear naked choke. Unfortunately for him, time ran out.

Collard came out with the pressure again, moving forward with combinations. Collard was really winging those punches. Eventually Trator moved in close and got the clinch but Collard was able to get out of it. Collard went for a spinning elbow but missed. With his back on the cage Collard connected with some solid punches, then moved away and returned to the center. Collard rocked Trator who went down. Collard tried to move in for the finish. He was unable to get it and Trator eventually got the reversal and wound up on top in half guard, then full back mount. Collard stood on his feet and bent down, trying to shake Trator off his back. He eventually was successful and moved in to the downed Trator, looking to land some strikes from above before the round ended.

In the third both men looked a little tired, with their punches getting a little wild. Collard again landed big punches with his back towards the cage. He started putting his head out and his hands low. Tractor landed a nice straight that sent Collard’s head back. Trator started landing more. Trator moved in for a takedown, but Collard brushed him off. Collard kept getting tagged with the right hand. He got Trator down briefly, but Trator got right back to his feet. Then Trator got Collard clinched on the cage. Collard tried to drop down and roll out of it, it didn’t work, so he tried again, this time Trator took top position on the ground until the fight ended.