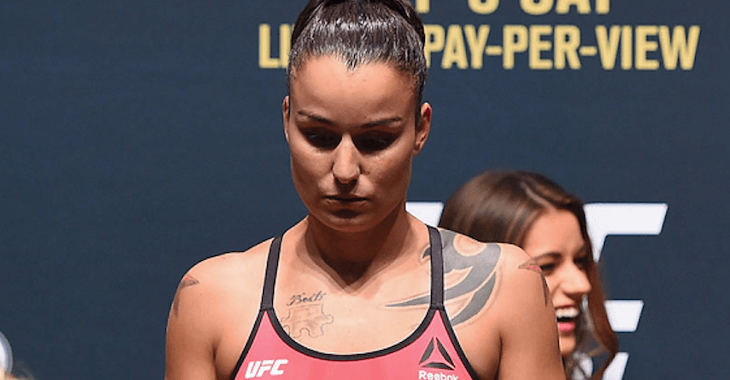 In a rematch that seemed pretty unnecessary, UFC bantamweights Jessica Andrade and Raquel Pennington went at each other again.

They came out swinging right away. Andrade looked to land wild punches.She eventually clinched up and looked to get a takedown over Pennington. She managed to pick her up and slam her down. From there she worked from full guard. Pennington got to her feet but Andrade tried to jump on her back. She wasn’t able to and Pennington ended up getting the clinch on the cage. She landed a few nice knees to the body, but then got reversed. Andrade then looked to get her down. She did, but Pennington got right back up. Still, Andrade kept her on the cage, then Pennington managed to reverse. She worked some close striking. Again Andrade got the reversal and started landing big punches. They continued to battle on the cage. Andrade grabbed a leg and got her to the ground before the round ended.

In the second round Andrade came out with some nice leg kicks. Then they both started swinging and landing with big punches. They clinched briefly. It looked like Pennington was starting to find a good rhythm. Pennington shot in and right away Andrade grabbed her neck for a guillotine. It looked pretty tight. Andrade used it to get up. Then they went back to swinging at each other. Pennington again landed a big double leg, but again she got caught in a guillotine. Andrade, working from the bottom in full guard held onto it for a while. She lost it and Pennington stood up and looked to land strikes standing over the downed Andrade. Andrade tried to get up but Pennington saw an opening and jumped on her, taking her back and locking up the rear naked choke right away. She flattened Andrade out and forced her to tap.

RESULT: Pennington wins via submission (RNC) at 4:58 of round 2.