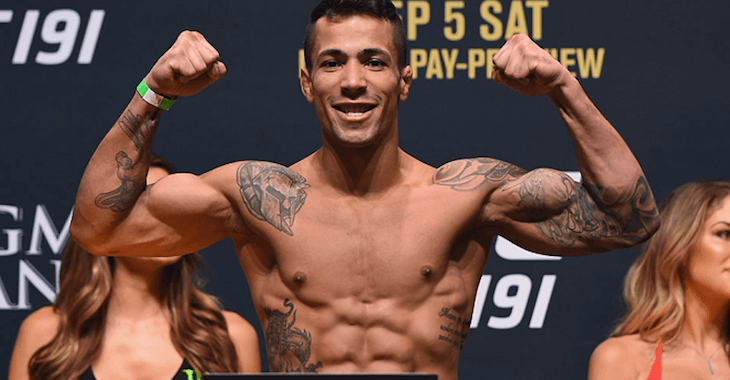 Early on in the first fight of the night Nazarene Malegarie managed to connect with two huge left hands.

Joaquim Silva continued to press forward. Malegarie again landed the short left hook two times in a row. Then moments later landed the same punch again. Silva seemed unable to keep it from landing. During an exchange Silva was able to land a nice uppercut. Silva started to find his rhythm, landing two big step away right hands. Malegarie lands another nice left, then shot in for a takedown. He pushed Silva to the cage but then was reversed and put on the cage. Moments later they broke away.

Malegarie fakes a takedown and threw a right hand. Right at the end of the round Silva threw a big flying knee that looked to have connected.

Malegarie seemed pretty aggressive at the start of the second round. He moved in early and got the takedown. After some brief work on the ground, Silva was able to get to his feet. Malegarie was bloodied up. Silva kept landing some nice knees, including a nice jumping knee. Malegarie landed another big left hook, but Silva just walked through it. Silva threw another leading knee. Silva landed a right hand, then Malegarie countered with that left hook again. Both of these guys seems down to stand brawl, both throwing and landing big shots.

At the start of the third Silva landed a big knee to the body, timing it perfectly. Silva then threw a high kick but it was blocked. Both men started turing the pace up. Silva moved forward, aggressively looking for punches and then threw a leaping knee, but was cracked with a big left from Malegarie. Good stiff jab from Malegarie, followed up with a left hand. Silva again went for a big knee. Silva threw a big body kick, but it landed on the arm of Malegarie. Malegarie caught a kick with a minute left and went in for the takedown. He got him down, but right away Silva moved to his feet. Pretty good scrap to kick things off.