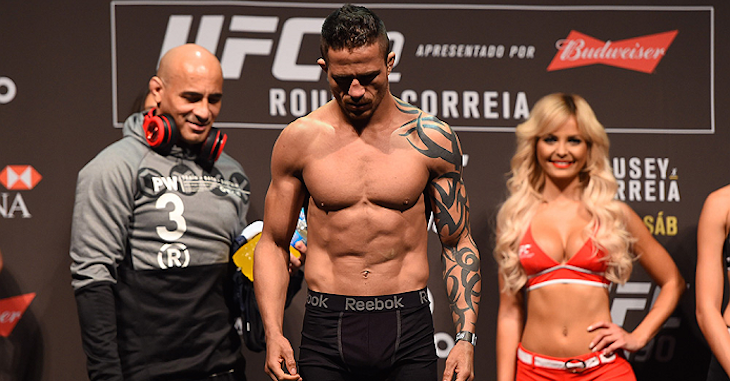 The bantamweights of the “Ultimate Fighter: Brazil” brought the crowd in Brazil back to life with the opening round of their finals bout, but the pace of the fight quickly faded from there.

Dileno Lopes and Reginaldo Vieira had an amazing opening sequence as they essentially went guillotine for guillotine. Every single attempt looked like it would put the victim to sleep, but neither Lopes nor Vieira could finish the submission. The guillotine attempts caused the pace of the fight to slow down drastically and technique was thrown out the window.

Vieira and Lopes relied heavily on leg kicks and random takedown shots to lock up the decision win; it was clear neither finalist had the energy to knock the other out. The crowd was on their feet at the start of the first round, but they were voicing their disproval of the inactivity by the time the final round started winding down.

Lopes tried to lock in the third and final guillotine attempt in the last minute of the fight, but the blood pouring from Vieira’s cuts aided him in escape.

Both fighters tried their hardest to end the fight as time wound down; Vieira was blasting Lopes with hammerfists while Lopes was retaliating from the bottom. As the last horn sounded, the fans rose to their feet to show their appreciation and the decision could have easily gone either way.

Three judges all agreed that Reginaldo Vieira did more than enough to earn the title as “The Ultimate Fighter Brazil’s” newest ultimate fighter!