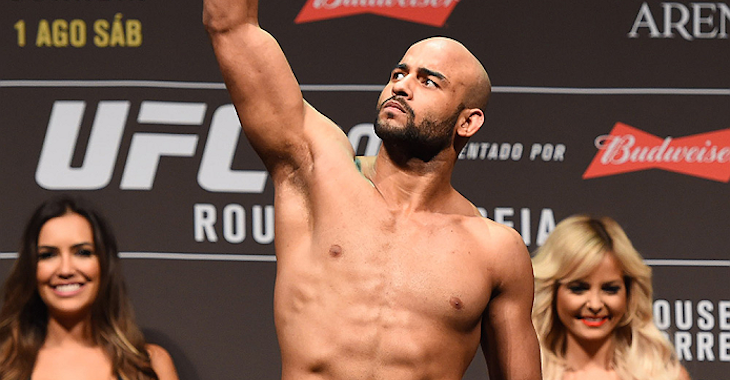 Warlley Alves gave the Brazilians something to cheer for when he forced Nordine Taleb to submit toward the end of the second round! It was the first stoppage on the Fox Sports 1 portion of the preliminaries.

Alves impressed right off the bat with his ability to find a comfortable striking distance right off the bat. Taleb was taken back with Alves’ ability to close the distance in such a quick amount of time. Alves wasn’t able to finish the fight in the first, but he controlled where the bout went and his dominance continued in the second round.

Taleb spent the majority of the second round on his back before desperately shooting for a takedown of his own. He gave up his neck and Alves trapped him in a guillotine choke before dropping down to the canvas.

Alves’ back was close to the fence, but he turned away so he had room to torque the submission hold. Taleb waited for a few seconds before tapping out, hoping an opportunity to escape would present itself but Alves had the hold locked on tight.

Alves is now undefeated with a record of 10-0

Warlley Alves def. Nordine Taleb by way of Submission (Guillotine) 4:11 of Round 2