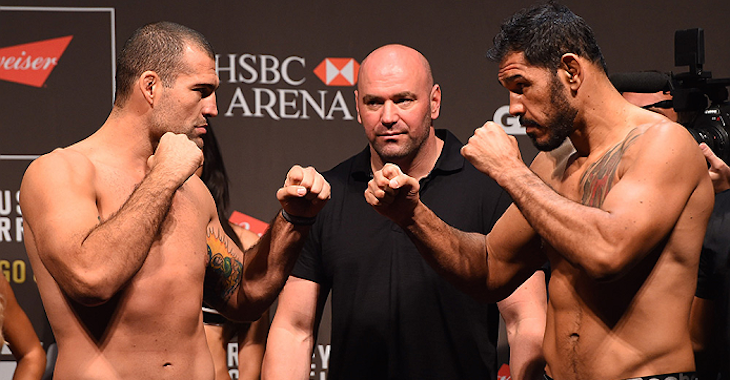 UFC 190 is in the books and the bonus report is in! Four fighters took home an extra fifty thousand dollars for their performances tonight in Brazil— check out who it was below!

Performance of the Night: Ronda Rousey (vs. Bethe Correia)
Regardless of how much money she made tonight, Ronda Rousey 100% deserved this Performance of the Night bonus. Nobody expected her to out strike Bethe Correia, but she only needed 34 seconds to dispose of the Brazilian on her home turf. Rousey face-planted the challenger and proceeded to wrap her UFC Women’s Bantamweight Championship around her waist in celebration of her win.

Performance of the Night: Demian Maia (vs. Neil Magny)
Demian Maia continued to impress with his grappling skills tonight in his bout with Neil Magny. The talented Magny stood no chance in defending the jiu-jitsu skills of Maia who wrapped around him like a boa constrictor. It wasn’t long before Maia left the octagon with his hands raised in victory.

Fight of the Night: Shogun Rua vs. Rogerio Nogueira
PRIDE veterans Shogun Rua and Rogerio Nogueira brought the crowd to life after a handful of uneventful bouts between “The Ultimate Fighter: Brazil’s” finalists. Rua was rocked early on in the first round and brought the crowd to their feet as he fought back and defended himself by winging punches with his head burrowed low. Nogueira was actually caught by one of them and was eventually wobbled back. The fight’s pace slowed down as the time grew, but you could tell these PRIDE veterans were leaving it all in the octagon.