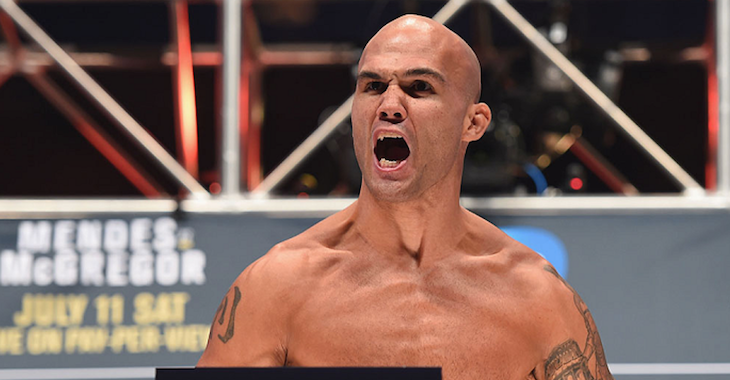 The co-main event for the UFC welterweight title just went down between champion Robbie Lawler and challenger Rory MacDonald.

Right away, MacDonald landed a front body kick. Robbie lands a strong inside leg kick. Rory landed a jab. Both fighters were being patient. Another kick lands for Rory. Rory throws a one-two that connects. Rory landed a jab, Lawler fires back with big punches that are mostly blocked. Rory really finding a home for the jab and body kicks. Rory throws a combo, connects with one of the punches. Lawler connects with a straight punch. Round ends. A lot of feeling out.

In the second the feeling out process continued. Rory landed a few leg kicks and kept the jab out there. Lawler landed with a straight, and MacDonald answered back with a quick flurry. Lawler connected with a strong jab. MacDonald throws a big head kick. Lawler barely blocks it. MacDonald’s crisp striking started to land more. Lawler connected with two big shots. The pace started to pick up. Lawler started connecting with more big punches. Rory’s nose was busted up, with lots of blood. At the ten second mark Lawler landed more big punches.

In the third Lawler went right back to work. Lawler looked really smooth with his punches. MacDonald kept throwing one-two combos, while Lawler came in with big punches that landed more. Rory went for a takedown, Lawler stuffed it. Rory’s face looked really bad. Rory almost landed a big head kick. He tries again and almost connects. Rory lands a big head kick that wobbles Lawler. He steps back and stumbles on his feet. Rory charges in and started unloading. With Lawler’s back on the cage they both started swinging. Lawler was hurt, but survived .

In the fourth MacDonald came after Lawler. MacDonald backed Lawler to the cage and went after him.  Lawler still looked a little hurt. Lawler got away from the cage but still looked a little wobbly. Things looked bad for Lawler but he turned and told the referee he was fine. They circled away from the cage. Lawler lands a nice combo. Lawler lands a few nice combos. MacDonald shoots in but Lawler sprawls.

In the fifth and final round both fighters came out looking messed up. Rory lands a good jab. Lawler tags with a left hand. During an exchange Rory drops back holding his face. The replay showed Lawler land a clean straight left to Rory’s nose. Right away Rory grabbed his nose and fell back. The referees stopped the fight.