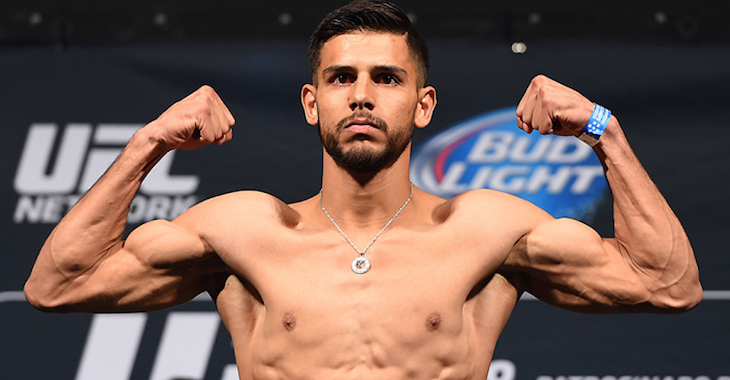 Yair Rodriguez and Charles Rosa squared off in the featherweight division.

Rodriguez came out flying! He threw a flying knee, jumping spin kick, jumping switch kick all in the first few moments of the fight. Eventually Rosa moved in close and the fight went to the ground. Rosa got caught in a triangle. Rodriguez had it locked in tight. Rosa eventually got out, solid submission defense. Rosa was on top after that escape and started blasting Rodriguez with punches. Rosa moved quick to get to the back. He locked in one hook, then worked for the other. Rodriguez defended well, keeping Rosa from getting the second hook. Rosa got Rodriguez down again after he got to his feet. Rosa moved into the full guard. Rodriguez pulled off a crazy escape and got to his feet. Right away he landed a nice leg kick. Crazy round to start the fight.

In the second Rodriguez continued to land big leg kicks. Rodriguez landed a big head kick when Rosa ducked down. Rosa went for a takedown, but failed. He shot in again and Rodriguez brushed him off, then landed a massive body kick. Rosa landed a nice leg kick, then shot in again. Rodriguez again escaped the takedown. Rosa tries for a clinch takedown, Rodriguez reverses and takes Rosa down, but stands back up. Rosa relentless with the takedown attempts, gets Rodriguez clinched on the cage. Referee stops the fight to look at a cut on Rosa, then they start again. Rodriguez lands more huge leg kicks. Rosa gets desperate and essentially pulls guard, trying to grab the leg of Rodriguez. He gets away. Rosa goes in again and gets Rodriguez down, but then gets reverse and Rodriguez ends up on top, and starts blasting him with elbows. Rodriguez looks amazing.

Rosa lands a big right hand to start the third. Rosa gets the takedown, and works in full guard. Rosa postures up and lands some big right hands. Again Rodriguez locks up a triangle. Rosa breaks free. Rosa gets position and tries to get the crucifix position. Rodriguez gets out and back to his feet. Rosa gets him down again, lands in side control. The fight ends with Rosa on top throwing down punches. Amazing fight.

During the post fight speech Rodriguez apparently got sick all over himself.