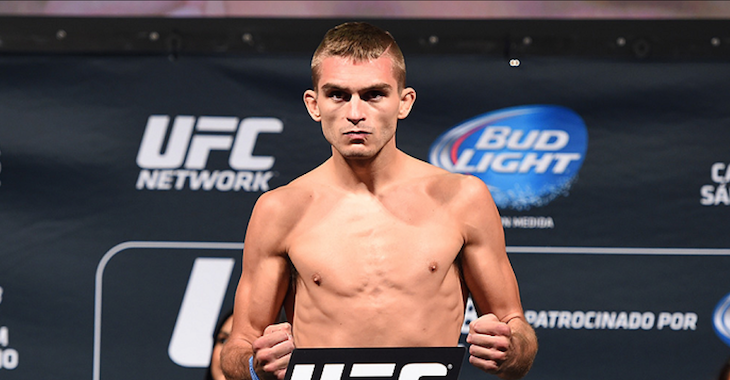 Trevino came out with a nice leg kick. Trevino threw a leg kick that was caught by Case. Case landed a big body kick while Trevino was pushed to the cage. They broke away. Again Case landed big body kick. It was the battle of the kicks for a while, with both men landing leg kicks and body kicks. Trevino came in with a punch combo but got countered with a big strike. Moments later Case took a finger to the eye and ran away, then dropped to his knees. The doctor came in to look at Case.

After a while they continued. Case got the fight to the ground. Working from full guard, Case landed short punches and elbows before the round ended.

In the second Case came out and landed a big body kick. Case did job of throwing nice combos, with kicks and punches. Case was able to get ahold of Trevino and get him to the ground. Case worked from full guard, then passed to side control. Then he quickly moved to back mount, Trevino tried to spin out. but was unsuccessful. He kept trying to roll, Case got a guillotine locked up while he was trying to scramble. It looked tight, but Trevino escaped and got on top briefly before the both got to their feet. Case again grabbed him and threw him to the ground. Case tried to work from back mount again. Trevino was able to get to his feet before the round ended.

In the third Case came out throwing heat. Trevino went for a side kick, Case ducked down and nearly fell over. Didn’t look like it hit him, he just lost balance. Case caught Trevino with a few nice punches. Trevino tried for a spinning back fist, but didn’t land it. Case moved forward and got a takedown. Case moved into half-guard, then back to full. Trevino tried to roll and escape, Case got on his back, but again Trevino defended and got loose. Then Trevino moved in and clinched Case against the cage. They broke free and went back to striking for the remainder of the fight. Decent fight.