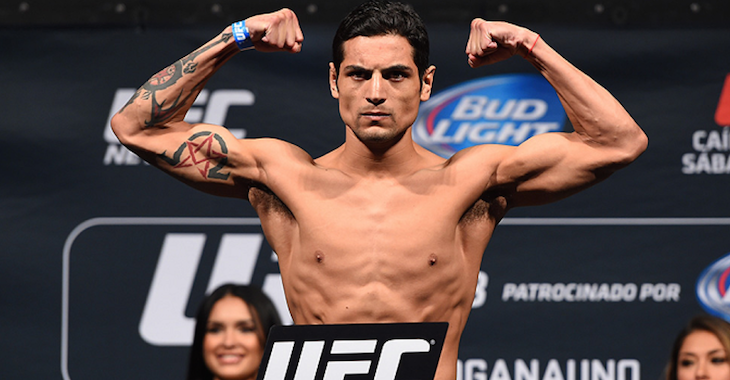 UFC 188 kicked things off with the featherweights. Gabriel Benitez and Clay Collard were the first to step into the octagon tonight during the UFC Fight Pass prelim.

The fight started and almost instantly Collard was on the mat. He came in with a leg kick but got caught with a punch that looked to drop him. He got to his feet quickly. He seemed alright. After a few exchanges it looked like he got tagged again. He continued to come in with leg kick.

Benitez caught him with a big leg kick that caused Collard to bounce on one leg for a moment. Collard moved forward while they were clinched and tried throwing uppercuts to the body. Unforutnaltey one of those caught Benitez right in the crotch. After a short break they started again. Both fighters came out swinging. Collard looked for a takedown/clinch against the cage. Right away Benitez jumped on a guillotine and pulled guard. Collard stayed standing with Benitez pulling on his neck. Eventually Benitez dropped and Collard took top position. In a scramble he quickly went to the back of Benitez and started working for a choke. Benitez survived and got to his feet, but Collard stayed active and kept him pressed on the cage in the clinch. With 30 second left he picked Benitez up and suplexed him to the mat. First round ended.

In the second Collard came out extra springy on his feet. He landed a few nice jabs. Benitez caught him with a nice body kick and body punch. Collard came in with an elbow but got countered. Benitez landed a nice left hand. Then he threw a leg kick and Collard shot in for the takedown. He got it but only briefly before Benitez got to his feet. It looked like Benitez might have hurt Collard with a body kick, who then basked up to the cage. Benitez rushed in but Collard ducked under for a quick takedown. The fight returned to the feet shortly after. Collard started leaning forward and putting his hands on his knees. Not sure if he was taunting or literally tried. He continued to look gassed and swung wild punches. At the end of the second, Collard isn’t looking good.

He gets off the stool for the third and went to work. Benitez landed several nice leg kicks, while Collard tried to land big punches. Collard shot in on a strange looking, desperate single leg. Benitez defended and ended up on top. He stood up and they continued to go at it. Collard still looked winded but continued to come forward, going for another takedown. Benitez defended again, with his back on the cage, until Collard finally got him down. He got to Benitez’s back and started throwing punches, trying to set up a choke. Benitez was looking at the camera the whole time, sitting up, just smiling and waiting out the clock. Fight over.