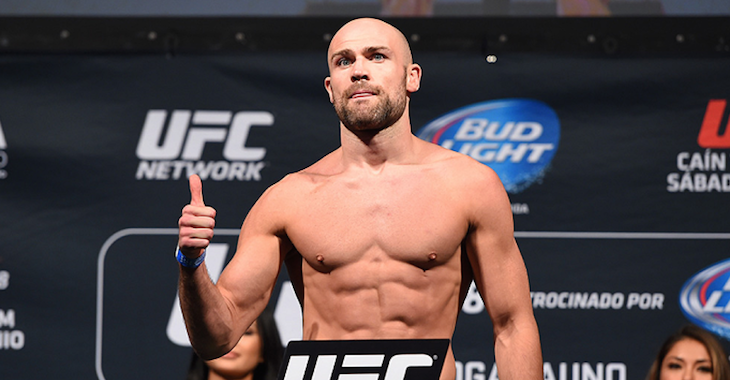 Montano came out and struck first with a side lek kick. Both fighters spent some time feeling each other out. Pendred went forward, looking like he wanted a takedown, but backed off. A moment later he did go in for a takedown and got Montano on the cage. Montano broke away an they returned to striking. Pendred tried for a spinning kick, but failed. Looked like Montano’s movement was frustrating Pendred. Montano constantly circled while Pendred walked him down. Pendred put his arms down to his sides and just started walking toward him. Montano came in and went for a punch but something happened and he fell back. I didn’t look like Pendred even touched him, but he rolled backwards and to his feet. Pendred rushed in but Montano was quick to get out of the way of any attack. Round ended.

Right before the round started Herb Dean warned Montano to engage or he would take a point. He certainly did, dropping Pendred with a quick right hand. Pendred got up quick and immediately looked for the clinch against the cage. He eventually got the takedown. Montano managed to get to his feet, ate a knee to the head, then got taken down again. Montano again got to his feet but Pendred was relentless with the wrestling and drug him down again. Pendred locked in a front choke, but Montano survived and got out. Pendred, still on his back, started throwing punches to the side of his head. Montano got free and tried to move away but Pendred stayed on him, clinched on the cage, until the round ended.

In the third they came out and Montano landed a few leg kicks and knees to the body before Pendred got ahold of him and tried to clinch him on the cage. This time Montano got free and returned to the center of the octagon. Pendred wanted no part of the stand up and again pushed Montano the cage. After doing basically nothing they broke apart. Pendred just looked ridiculous on his feet. He barley threw anything, just waited for a good time to shoot in. He kept getting frustrated that Montano wasn’t coming in more, but wasn’t doing much himself. Fans weren’t very happy at the end of the fight.